22 posts categorized "Stumbled onto While Drinking"

Smutty bars. And the butts who smut them.

I was discussing weekend plans with a colleague.

"What do you mean, you're going on a pub crawl with a bunch of bloggers?" she asked. "I thought blogs replaced social life."
"Not necessarily," I corrected her. "In my case, melancholy, ennui, self-absorption, business travel, and curling up in the foetal position amongst the bedclothing for hours on end have replaced social life. But I don't have too many business trips this month, so I can squeeze in a pub crawl."
Of course, my fellow revellers won't be short on self-absorption. It's the JoeMyGod New York bloggers' second annual Blarg Hop; a schmoosh-word that combines blog and bar.
I imagine we're only doing it to blog about it later. Yes, blogs do replace life, but a successful blogger needs to keep a few organic processes going, in order to have something to blog about.
You can tell we're mostly gay bloggers, too. Bars include Dick's Place and The Cock. I haven't seen such a list of suggestively-named bars since I left Japan. And they didn't know what the names meant.
Expect a report on Sunday. Maybe. I could be curled up in the foetal position amongst the bedclothing for a few hours.
As ever, a hat tip to Joe Jervis for organising it. 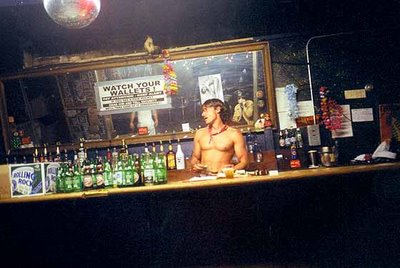 This fetching shot of The Cock was borrowed from their New York Magazine listing, snapped by Ryan McGinley. As is HMH policy, should the copyright owner of the photo (or that spunky barman) wish for me to remove it, I'm happy to do so.

Posted at 12:00 AM in Assorted Faggotry, New Fucking York, Stumbled onto While Drinking | Permalink | 0 comments

Stumbled onto while drinking: Opera. 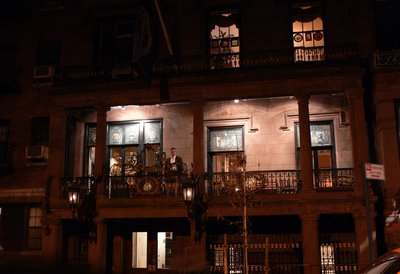 The Players Club.
(photo sourced from the club website)


You know, I've thought of giving up the drink, for all kind of reasons.

To preserve health. To preserve a youthful twinkle in the eye, and a white eyeball on which to display it. To preserve several hours of the next day for productive endeavour. And to preserve some semblance of sanity (I've a family history of alcoholism on both sides, so one has to be careful).

But dammit, life's so much more interesting with a drink in your hand. So, when my old pal Mackintosh arrived in town on a junket last weekend, we went out for a few glasses of preservative.

I know Mack through my number one fag hag, Miss Betty Ford. Now, Betty is a woman of enormous capacity. She can juggle several fags at once. Mack and I are two such lucky homosexuals.

We met at The Players' Club, in Gramercy Park. (The Goddess of Love nominated me as a member, by the way.) This grand institution deserves several bloggings in its own right. But later.

For now, you should know that The Player's hosts all sorts of theatrical events. We stumbled onto a rehearsal for one of them; Voices in Our Heads, the public concert of the VOICExperience Foundation's annual Opera as Drama workshop.

Perfect. Wally, Mack's ex-boyfriend, is a tenor of great force and talent. They met through musical theatre; Wally onstage, Mack admiring from the pit. Though he's long since given up music as a profession, with such a history, Mack was curious to eavesdrop.

A kind woman invited us into the auditorium to listen--a great privelege, since it was officially a closed rehearsal.

I'm afraid my reply to this kindness demonstrated some very poor New-Yorking skills. I am utterly inept at picking up a dropped name.

"What a great opportunity! " she said to me, "Sherrill Milnes is artistic director, and one of the world's leading Verdi Baritones. Do you know his work?"

"Cheryl?" I stammered. "I think I dated a Cheryl once, when I was young and confused."

"Um...right. And we have secured the counsel of Fabrizio Meloni."

"Ah...Fabrizio. My mother will buy any novel if he's on the cover."

"No, he's the prominent operatic director. Joan Sutherland selected him for her farewell performance."

"Yes! La Supenda!" I cried, relieved that I could say something which suggested that, at least, I had heard of Joan Sutherland.

"He was able to direct her in the style of Callas. You have heard of Maria Callas? Hahahaha...just joking"

"You're not joking by much." I confessed. I know so little about opera, I thought Nessun Dorma was a Japanese campervan.

We caught the troupe as it blocked out its piece; that is, the surprisingly complex process of managing actors in the physical space of the stage. Entrances, exits, props--what film people would call continuity. "Now, the alto holds the rose in her left hand, so the tenor needs to escort her downstage withthe right hand."

Milnes' wife, noted soprano Maria Zouves, ably co-ordinated this, while Meloni concentrated on the presentation of the singers' performances. Opera places such physical demands on a singer, that combining it with some form of natural-looking posture becomes difficult.

Meloni showed his mastery of this craft, advising singers on stance and attitude. Where a naturalistic pose wasn't possible, he commanded a vocabulary of stage conventions that would, at the very least, read well to the audience.

I learned a great deal in those few moments of observation. Of course, we were treated to some sublime singing, into the bargain.

Mind you, a few moments of the sublime with the aid of a skinful is my ideal way to enjoy opera. Operatic emotions are so BIG, I just want to hide from them.

The perfect opera experience for me happened at the Sydney Opera House, in the company of Princess Grace.

I mean, when you visit Sydney, you want to go to a performance in the Opera House so you can say you went to a performance in the Opera House, right? We bought $20 door-rush tickets to the peanut gallery and retired to an excellent nearby sushi bar for some sake and salmon. (This place is so good, even George approved when I took him there later).

Half-sloshed, we missed the curtain and had to wait until intermission to enter. Two German tourists found themselves in the same boat, so we had a few more drinks and enjoyed some jokes told by the usher, an elderly moonlighting comedian. We admired a stunning view of the Harbour Bridge over a cocktail or two.

By the time we took our seats, we were three sheets to the wind.

Twenty bucks worth of opera

We couldn't actually see very much from the peanut gallery, which make sense if you follow the tumultuous story of the Sydney Opera House.

The inside and outside were designed by different architects, so the guts and the skin don't quite fit. The upper balconies offer some seats with limited visibility, of which the management warns you. One can see the singers, but no chance of admiring the scenery.

After about 15 minutes, the Princess turned to me and whispered, "I gotta pee."
"If we go out, we can't come back in again," I replied.

"And your problem with that would be...?" She winked at me, and we bid a hasty exit.

Later, we agreed that $20 for 15 minutes of opera probably added up to decent value for money, at rack rates. I just wish I could remember which opera we failed to see. Nabucco, I think. 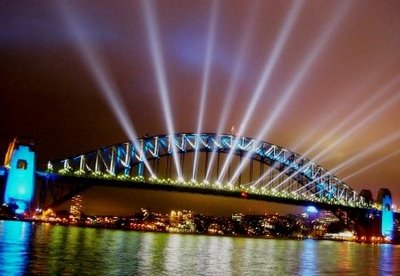 Our view of the Sydney Harbour Bridge, with strains of Verdi in the distance.

Posted at 12:00 AM in Arts and Humanities, Assorted Faggotry, Australia, New Fucking York, Stumbled onto While Drinking | Permalink | 0 comments