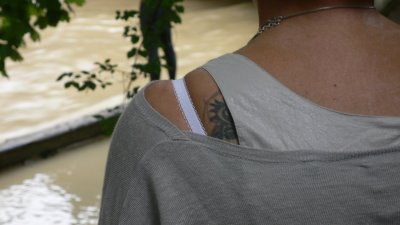 Posted at 12:00 AM in Wordless Wednesday | Permalink | 0 comments 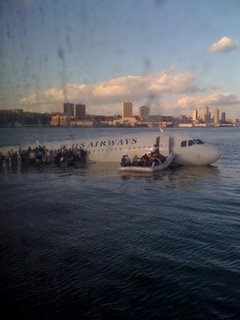 The more you fly, the more you fear flying, they say. Yours Truly, whose frequent flyer cards drip with gold, diamonds, plantinum and emeralds, is such a flyer. Sheer mathematics convince anyone with a nervous disposition that his number must come up, sooner or later.

That's why I got in the habit of (don't laugh) counting the rows to my nearest exit, which, for those of you who weren't paying attention, may be behind you. If you fly Qantas, the sultry-voiced Angela Catterns scolds blasé frequent flyers to listen up; you may think you've heard the safety drill before, but every aircraft is subtly different.

Nonetheless, even the biggest scaredy-cat browses the in-flight magazine during the life-jacket bit. Nice in theory, but no pilot has ever successfully ditched in water. One wing generally touches the surface first, and flips the plane. Or the whole kit-and-caboodle is so busy dropping out of the sky that your seat cushion-cum-floatation device may be too little, too late.

Much has been written about USAirways #1549. About the skill, heroism and modesty of the pilot. About the speed with which NY Waterways craft were able to rescue the passengers. And a lot about divine intervention, prayer, grace, or sheer good fortune. FlyerTalk, and the Australian Frequent Flyer Community, both discuss the matter at length.

My first thought on reading the news, though, was this. Aviation seems to be getting safer.

Before you scoff at my bad taste, hear me out. Time was, not long ago, that any catastrophic system failure was a death sentence for passengers and crew.

Ironically, I was sitting in the USAirways lounge at LaGuardia in 2005 when an Air France plane skidded off the runway in Toronto. As news helicopters circled the flaming aircraft, broadcasters solemnly mouthed pity on the travellers inside, unable to imagine that anyone could survive the flames. Yet, everyone escaped alive, thanks to an incredibly alert and well-trained crew.

Last year, I was actually booked on the British Airways flight from Beijing that crashed-landed at Heathrow. It may seem odd to write that it "crash-landed successfully", but no other phrase seems more appropriate. Everyone lived.

Those in the know, credit the pilot's skill. "He deserves a medal as big as a frying pan," they said. Let's hope he got one.

(An aside. At the last minute, accountants at my firm switched the ticket to Air China, on cost grounds. They take this incident as a moral lesson in the virtues of pennypinching.)

Yesterday, benevolent forces controlled the universe. Or, just as important, even in an atmosphere of absurd cost-cutting and near bankruptcy, the behaviour of the pilot and crew suggests that airlines seem not to have skimped on human factors in aviation safety. Perhaps, they took lessons from safety breaches, and trained crews for many more contingencies. Perhaps they recognise the human element as the most important factor in air safety.

I never thought I would say this. Goodonya, aviation industry. And--no, hear me out-- congratulations to USAirways. They may cancel flights and lose luggage, but they appear to have put real effort into improving their safety record. EDIT: Spoke too soon, perhaps?

Personally, I am grateful. Munich and Pittsburgh, for obvious reasons, are two airports I use a lot, and USAirways maintains a significant presence in both.

It seems that the pilot of the stricken plane was, in fact, one of the key movers responsible for crew training standards. His LinkedIn profile shows two recommendations. When he gets to work on Monday, I would be surprised if there were not, at the very least, 155 more.

The photo credit is a triumph for the citizen journalist. It is Janis Krum's first Twitter photograph of the plane in the Hudson, sourced through (ironically enough) a website named Boing Boing.

Posted at 12:00 AM in I was just thinking, New Fucking York | Permalink | 0 comments 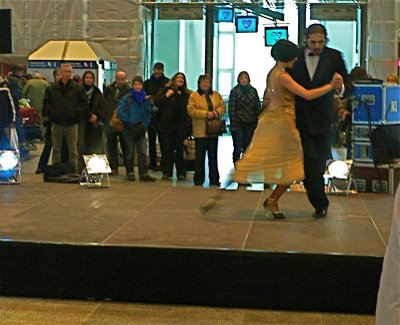 Germans have a name for the folk who inhabit the southern reaches of the state of Baden-Württemburg. They call them Swabians.

The name carries some unfair baggage. The stereotype paints them as dour, mildly pessimistic, stubborn, cheap (EDIT: thrifty), prone to one beer too many. Swabians are, many mantain, the Scotsmen of the Continent.

Fun-loving Bavarians love to diss Swabians. How can they live so close to France, and not pick up some joi d'vivre? How can they make the world's most superb luxury cars, and take so little joy in personal luxuries? And why do they have such lousy senses of humour, even by German standards*?

Stuttgart is the capital of Baden-Württemburg, and I travel there a lot for business. On the way home yesterday, a curious sight confronted me at the Hauptbahnhof.

The Argentine** Tourist Board sent two tangoistas on tour, to encourage shivering Germans to enjoy a sunny, South American summer.

The tango: a dance of love, a declaration of passion, a sexual intrigue on four feet. Here is what the Argentine Tourist Board says about the tango

"So far, everyone from the intellectual to the suburban[ite] create, feel and speak the language of tango. And even though much has happened since 1880, the essence of tango, brazen, unrestrainable and bonded by blood, remains latent in the canteens of La Boca and in the saloon bars of Recoleta."

Drink what agrees with you,
Eat what you have available,
Do what you're supposed to do,
Say what you're allowed to say,
Think what you want to think.

(By the way, Lämmle is considered a Swabian wit.)

Hardly surprising that our splendid, passionate tangoistas found an audience. A fine audience, a curious audience, even. But a small one. Who never quite got excited by it. 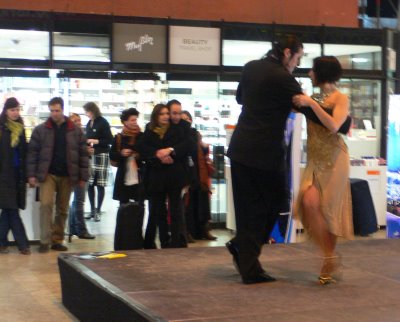 You can see a gentleman in the picture immediately above, siezing the opportunity to interest his Fräulein in a lttle romance. She ain't buying it. A true Swabian, she's doing what she's supposed to do.

People are different. Ain't it great? 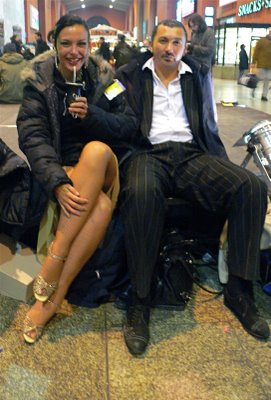 *OK, that was a cheap shot.
** No jokes about the Special Relationship, please.
Hat tip to this gent. 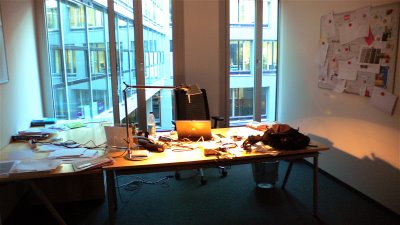 The Honourable Desk, at Prominent Global Communications Firm GmbH
Today, January 12, sees the Professional Personal Organising Community aflutter over National Clean Off Your Desk Day. In a brilliant stroke of post-modernism, the day was first declared by a leader of the Professional Day-Declaring Community.

I have two words for the Professional Personal Organising Community. One of them is off.

You have read before that the Honourable Husband's clan lives in junkyards. We are slobs, with a capital ob. Yes, it's dysfunctional and neurotic, and we have some damn fine reasons, thanks.

Since moving to Germany, where Ordnung ist das halbes Lebens, The Honourable Husband has attempted to mend his ways.

In part, one can thank The Enforcer, our Putzfrau. Master Right is neat. I mean, like Japanese neat. Even he maintains (get this) she's too professional.

For example, since we're guys, we both used to do, um, the toenail thing. You fellas know what I'm talking about. Well, we don't do it any more.

But I draw the line at the desk. It's a joke in the ad game that every strategy planner's desk is a fire hazard of research reports and articles he intends to read. Our hard drives groan with downloaded cool-hunting. You can't think without shit around you. It's not creative.

I know EXACTLY where everything is on my desk. 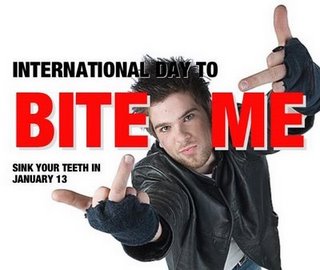 Yet the tyranny of the tidy means that over the years, people have looked at my office and sneered about it being unprofessional, even as I covered their asses and saved their bacons. You know who you are, my little honeys.

Time has come to resist. Do not be neatened. The Honourable Liberation Front declares tomorrow, January 13, as National Bite Me Day.

The boss. The guy at the DMV. Your mother. No matter what form of small-minded tut-tutter gives you the evil-eye, tomorrow is the day to tell them to kiss your sweet, fragrant buttcheeks. I might even design a logo for it, if I can just find my password to that online clipart site. I wrote it down, somewhere.

Posted at 12:00 AM in It's a Living, Men and Their Minds, Stupid Slice-of-Life Shit that's Supposed to be Charming, The International Day to Bite Me | Permalink | 0 comments 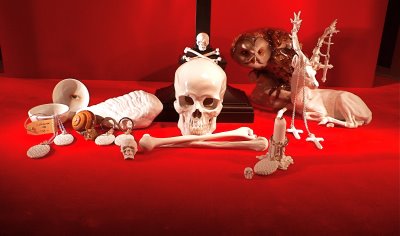 A cheerful little Christmas display in the window of Nymphenburg Porcelain.
Zurika has a few more views. In Japan, you can choose from two kinds of New Year's parties.

In between, the partying goes quiet, with visits to family, church, and emperor.

Other cultures, whose sense of ceremony demands less thoroughness, tend to fall into one of those two emotional camps.

Bavarians, ever the realists, stake out the bonenkai camp. On the Silvester, everyone wishes you a good Rautsch.

I think it comes from the German word Rausch. That is, a good flush. Open the sluice gates, because a torrent of last year's bad karma is going to make its way downstream. Hose it into the gutter for good.

The rest of Germany uses the word Rutch (so I discovered--thank you Damon!). It means to slide, trip, or fall. A landslide can be a Rutsch. Effectively, you collapse into the new year.

Maybe this confusion stems from the fact that we were pretty Rauched by the time we chatted about it.

Though it specifically refers to getting hammered on New Year's Eve, The Bavarians I know apply the word Rautsch to pretty much any serious drinking session.

Does this suggest Germans have an unhealthy relationship wth alcohol? Does it suggest that the sober order of day-to-day life conceals a good deal of sadness? Ah, repressed emotions! No wonder I feel at home.

Well, bugger that for 2009. Master Right was in Japan on a family matter, so I tagged along with Miss deYoung to a splendid party hosted by a French-Finnish couple. Most of the guests were French, and their spouses came from across the globe.

This turned much of the converstaion to English, which seemed to be everyone's relationship lingua franca. Not that it mattered. One of the miraculous qualities of alcohol is that, if you drink enough of it, all languages become mutually intelligible.

Still, this was a party with a definite French accent. No Rautsching allowed! French culture follows the shinenkai school. I think they call it joi d'vivre.

Here are six EDIT: seven reasons to go to a New Year's party where the hostess is French.

Munich Silvester revellers, rather dangerously, set off fireworks on my side of the Isar. It's exciting to be in the thick of it, but we got a much better view from our host's and hostess' spacious apartment on the opposite bank of the river. A bonne année, indeed.

2008 gave Master Right and I some great gifts. But there was plenty to Rautsch about, too. Some other time.

One thing we enjoyed in 2008, was the opportunity of make new friends in a new city. And to enjoy the company of many old friends who came to visit. To all of you, and to all you cyberpals, have a Frohes Neues Jahr.

(By the way, I'm pretty sure that last bit is corrrect German)

Posted at 12:00 AM in Stupid Slice-of-Life Shit that's Supposed to be Charming, The Holiday Season for an Atheist | Permalink | 0 comments