Home The Honourable Husband The International Day to Bite Me Subscribe
Waking up from the American Dream, Part One.
A leadership readership

Our sushi snobbery is legit. 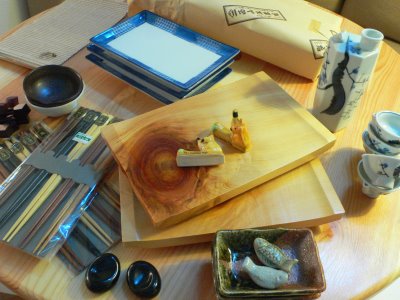 A full set of sushi kit, idle in Munich.
My boss loves sushi. He jokes that his middle name should be maguro.

I haven't the heart to tell him that maguro is nothing to boast about. Maguro, in Japan, is catfood. If he wants to boast, he should really name himself toro.

We went out to lunch at our local Japanese place. It's a species of restaurant which the Germans call, in borrowed English, running sushi. Those in the know would call it a kaiten sushi restaurant, one with a conveyor belt in the centre and diners who help themselves as dishes roll around.

After about thirty minutes, I asked him if he noticed anything odd about the place. No, he replied, it seemed fine to him.

I pointed out that amongst the many dishes which had passed before us in the previous half-hour, we had seen not one piece of fish.

He looked at the California roll impaled on the end of his chopsticks. With palpable disappointment, he realised he'd been eating a whole lot of seaweed and cucumber.

Now, I don't want to be one of those insufferable expats who once lived in Japan, and spends the rest of his life scoffing at amateur Japanophiles in the West. But really, Europeans have no fucking clue about Japanese food.

This taste test in the UK asked a respected Japanese chef to rate the food from London's most popular sushi restaurants. None rated above a three out of ten. These offerings achieved the the near-impossible; they made a Japanese person say something rude.

Master Right insists that one should never eat sushi or sashimi more than 100 kilometres from the coast. Looking at the mediocre fish on offer in the Viktualenmarkt, he has a point. The only place outside of Japan where we eat sushi is Australia; much of the Japanese catch originates there, in any case. (Here's a recommendation.)

Before I left Japan, we took an excursion to the Kappabashidori, the street where every Tokyo restaurant buys its supplies. (That includes the plastic pretend-food which they insist on putting in the window.) We bought the whole sushi kit, from the ceramic knife to the wooden trays to the birch chopsticks to the little bowls for soy sauce.

Since we moved to Munich, the stuff has gathered dust. 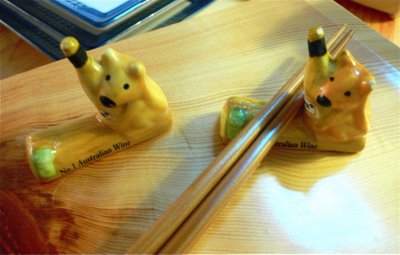 My favourite bit of sushibilia, found at a 7-11 konbini in Tokyo.
Two ceramic hashi-oki, or chopstick rests, which came as a freebie
around the neck of a bottle of Jacob's Creek.
No use regretting what you can't have. Better to celebrate Munich's culinary strengths. Münchners take great pride in the quality of the city's Italian food--in fact, Munich bills itself as the northernmost city in Italy.

This news hadn't quite reached our local Japanese place.

My boss ordered a caffe latte after his meal. "I'm sorry, we can only do espresso and cappuccino," explained the waitress. "We're Chinese, you see."

By the way, today's Photo Friday subject is Food.