Home The Honourable Husband The International Day to Bite Me Subscribe
Photo Friday: Near
Celebrity Neighbours 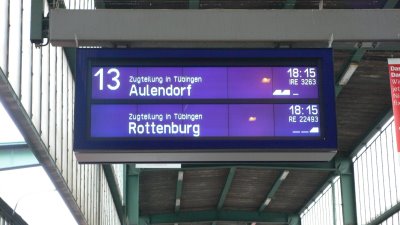 All aboard for Rottenburg! Use the caboose.
I don't like to blog about work, given the obvious dooce risk. But this curious bit of info came across my desk the other day, and it begs to be shared. Someone asked the population of a number of different countries if it's healthy to have a sense of irony.
Only about a quarter of Chinese agree. No surprises. They can lock you up for irony.
The UK is in the middle of the pack, and that surprises most people. Britons are line ball with the Irish and the Americans, at around fifty percent. I believe that only an older generation practices that peculiarly British habit of ironic self-deprecation. Young Britons are naive goofballs, just like their counterparts in the rest of the world.
France scores high; over 70% agree. No surprises there, either. They think Jerry Lewis is a genius. The only way you can appreciate Jerry Lewis is ironically.
The most healthily ironic people on the planet are...wait for it...Germans! Over ninety percent agree that a sense of irony is healthy. Whoah!
Before I came to Munich, friends gave me a book on assimilating into German culture. It stresses that one should not fall for the stereotype of the humourless German. Germans have a wonderful sense of humour, it declares, but they don't feel it's necessary for communication.
True enough. One hears much laughter and plenty of jokes, particularly after a beer or twelve. But don't expect a laugh from a casual acquaintance. I mean, have you tried to coax a smile out of a Bavarian shop assistant?
There's very little lighthearted, silly, absurdist humour. Of course, there is a species of German joke called the Antiwitz, which plays on stupid non-sequiturs. It is not funny, however.
Humour is serious business. Almost every remark I've heard from a German, in jest, drips with cynicism. German humour always a negative sting in the tail, where the gag comes from thinking the worst of people and their motives. Germans, after all, are the inventors of Schadenfreude. In every joke, there has to be someone who is the butt of it. Irony is the favourite laughter of the misanthrope, is it not?
Apparently, the German sense of irony is not new, as the extract below tells us. Hmmm. Is Kafka part of the fanciful, fantastic and extravagant tradition of German irony the author describes?
I'm a big fan of irony, so I should feel right at home in Germany. I even have a DVD of the so-called "lost" episodes of Monty Python's Fliegender Kirkus. It's subtitled in Japanese, just to up the irony ante.
OK, you bicultural types. What do you reckon? Do the Germans actually have a better sense of humour than anyone else in the world?

Posted at 12:00 AM in Arts and Humanities, Germany, I was just thinking, It's a Living | Permalink | 0 comments