Home The Honourable Husband The International Day to Bite Me Subscribe
Apologies to Oliver, Echo of Elvis
One man's belief. 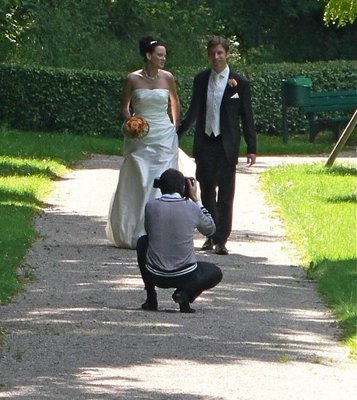 As if to rub our noses in it, our local park, Europa Platz beim Friedensengel, does a brisk trade in wedding photos. What's to bet that the bride chucks a wobbly and demands they retouch the rubbish bin out of the picture?
* * * * *
Naturally, Master Right and I are in favour of gay marriage. But we violently oppose gay weddings.

So many trappings of a conventional wedding demean and insult the couple whose joint life it is meant to celebrate. The bride officially becomes property of the groom, while the groom is more-or-less a bytander at the whole affair. Mainlining alcohol, guests unpack their emotional baggage on each other and behave like monkeys. Yes, weddings suck.


Thankfully, in Germany, one doesn't need to do all that. One simply visits a notary's office, signs an agreement, and you're hitched. Gay or straight.


Well, it's simple if you're German. If you're a foreigner, you need to wave a brace of documents under an official nose, to guard against bigamy, marriages-of-convenience, or other hanky-panky.


First, you need to prove when and where you were born, and that you are not married to anyone else.


No problem for Master Right. His birthplace, Japan, is sensible. The whole thing can be taken care of in a single visit to the consulate.


As a citizen of both the USA and Australia, I am in a messy position. Both countries are federations of states, and each state keeps track of hatches, matches and despatches.


The US authorities are uncooperative or obtuse, and the Australians are mostly drunk or something. The US is not a signatory to the Hague Convention for the internationalization of documents, so my birth certificate needed to cross the Atlantic several times to be stamped, sealed, confirmed, apostilled and vouchsafed by an army of civil servants. And in spite of letters and sworn statements which showed the contrary, the Australian Botschaft (embassy) still issued documents which referred to Miss Master Right. The Australian Botschaft? More like the Australian botch-up.
If you and your spouse wish to live here, the demands mount. One needs to prove coverage by health insurance and a sufficient income. You must submit a floorplan of your home; German law demands a home provide 12.5 square metres per person.


Further, the notary must satisfy herself that both parties understand the agreement. This means that one needs a sworn translator into one's native tongue.


Thus, a rather peculiar wedding party assembled last week, amid the girly, weddingy decor at the offices of Frau Ehe, Notary Public. There was Master Right, his Japanese translator, my English translator, and me.


Oh, and my translator's dog. He goes everywhere with her. Since this is an anonymous blog, I shall not post pictures of the wedding party, but I feel it safe to show a snapshot of the dog. His name is Kuscheln. Or, in English, Cuddles. 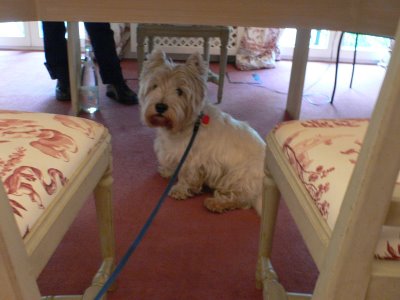 Cuddles always pees at weddings. It's the excitement.
As we waited for Frau Ehe to arrive, our translators chatted. Both had recently served time behind bars; that is, they translated in prison. I joked that they need adjust their vocabulary only slightly from arraignment to marriage. The Japanese translator remarked that foreigners can get themselves into trouble under both circumstances.


I really lucked into a great English translator; a leader in her field, and office-holder in the professional association of translators. She was curious to observe her Japanese counterpart, another highly-qualified professional, who faced quite different obstacles with her assignment.


The Japanese language uses sparse grammar and limited sounds. Much day-to-day Japanese is structured to keep a polite distance between two speakers; it can be constructed to reveal little.


When one needs to speak of more complex matters--like law, love or laughter--Japanese reverts to elaborate metaphor. And emotional arguments sometimes carry the same weight as rational ones.


A linguistic challenge, given the thorough, and thoroughly dry, German documents that Frau Ehe led us through. She took great pains to stress that the Lebenspartnerschaft wouldn't apply in the US, Australia, or Japan. She wanted to make clear that this union was not a back-door way to obtain a legally-binding marriage in our home countries.


Therefore, it was only useful if our life would be based in Germany. Herr Honourable has chosen to make his life in Germany, she observed, and asked if Herr Right had yet done the same.


Before Master Right could answer--indeed, before this were even translated into Japanese for him--the translator leapt into a passionate speech. This man, she pleaded, was a man of courage, following his dream and creating a new life in spite of the odds. This went on for several sentences. Master Right was touched.
"Would you like me to tell you our story?" I offered, in English.
"No," replied Frau Ehe, "I get it."
Naturally. our Japanese translator embarked on a subsequent translation of this whole exchange. And it served as a neat segue into Frau Ehe's next subject. A little homily.
We asked for no wedding vows or such silliness, but Frau Ehe decided she'd toss in a speech, for free. It picked up on the theme of courage.
She reminded us that the uncertainty which affects modern life acts against the idea of marriage. That making a commitment to a shared life, forever, takes bravery and faith in the future. She congratulated us for making that choice, in a binding agreement before the state. And, she added uncomfortably, God. Or, um, whatever we would like to call that thing up there. Ah, good ol' Catholic Bavaria.
Both our translators signed the document, along with Master Right and me. Et voila, we were husbands. We declined the you-may-now-kiss business--we're not into PDAs--and gave each other a hearty, relieved hug.
The perfect wedding, I think.
* * * * *
P.S. Hat-tip to Brock and Manuel for referring us to Frau Ehe.
UPDATE
We presented our Lebenspartnerschaft to the Kreisverwaltungsreferrat. (Don't you love German words?) Good news. Master Right now has a visa to stay in Germany, but he has five years to learn German. That will be amusing.

Posted at 12:00 AM in Assorted Faggotry, Germany, Secularism/Atheism, Stupid Slice-of-Life Shit that's Supposed to be Charming, The Husband's Most Honourable | Permalink | 0 comments