Home The Honourable Husband The International Day to Bite Me Subscribe
Echoes of Albert, Part Two.
Munich marinates in manliness!

Where is he gay today? Adamstown, PA

Right now, I’m looking at some toy furniture from 1959. The boxes are labelled Mattel Modern. The blurb explains how this furniture suits those new-fangled, dressable 9-inch dolls.
Not long after, one of those dolls went trash-glam. Her dream-furniture turned dream-pink, and she needed a dream-garage for her dream-campervan and dream-Corvette. As well, her dream-bed turned into a single, because she checked in her pal Ken's pants.

The price tag reads a hefty $950 for the set.  Elsewhere in this gigantic antique store (an old hat factory), you can buy the real thing for less.
Master Right and I are partial to the odd antique.  That’s why we chose to visit Adamstown, which bills itself as America’s Antique Capital.  In a store like this, I generally riff through the old books while he scours the building for decorative arts.
Alas, the town is a place for really serious collectors—most of the value in such stuff goes way over my head. Let's ponder this $350 Flying Nun Lunch Box, for example. 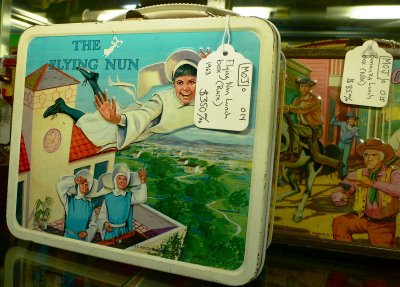 Now, why would the Flying Nun Lunchbox command over four times as much as the Bonanza version behind it?  Sexism?  Is it American religious mania at work?  Shouldn’t this precious lunchbox be in the Vatican?  How did the last pope overlook canonizing Sally Field?  Wouldn’t the Flying Nun and Little Joe make a nice couple?  Isn’t Carlos hot?  Do you think Hoss lives up to his nickname?  (Oops.In the most sexless situations, one’s mind wanders back to the biological imperative, no?)

Master Right and I were just about to leave for an ephemera-induced quickie when we chanced across a table full of Life magazines.  It looked like a full set, from the late thirties to the seventies, pretty much covering the entire Luce era.  The antique dealer, unable to sell the collection, had begun to flog individual copies at a fiver each. 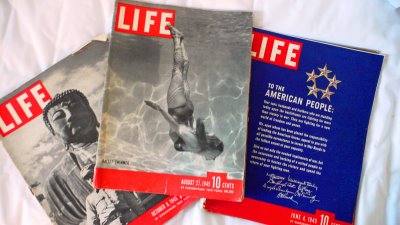 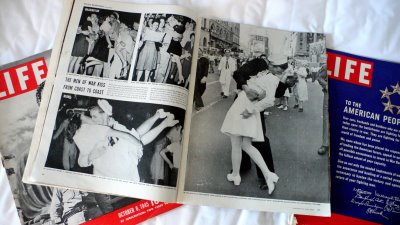 Sure enough, before us lay the magazine with that photo, arguably the world’s most famous.  I nearly missed it, since like most of us, one would expect such a famous pic to make the cover.

Alfred Eisenstädt was a Prussian Jew who fled the Nazis in 1935. He snapped the image with a Leica M3 (a German camera) on August 14, 1945, though it didn’t appear until the August 25th edition of Life.  His last photo, in 1993, was a family photograph of the Clintons. Eisenstädt died in 1995. 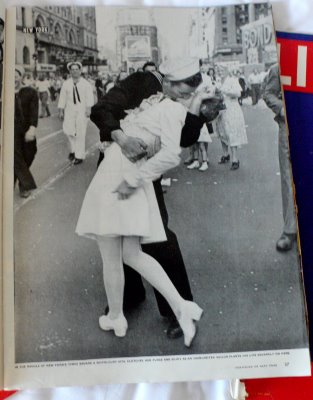 Five bucks later, we own an original appearance print of one of the world’s most famous works of art. Not a bad buy, I think.

Posted at 12:00 AM in Amerika, Arts and Humanities, Stupid Slice-of-Life Shit that's Supposed to be Charming, Where is he gay today? | Permalink | 0 comments