Where is he gay today? Under the flight path at Newark Airport 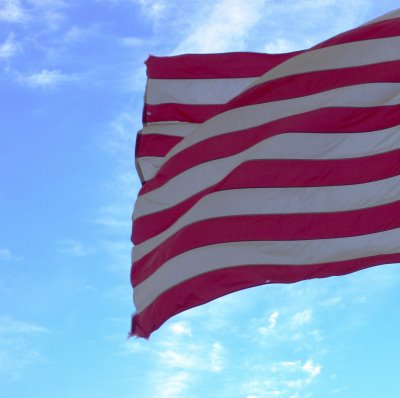 A frayed Old Glory
Visiting America always makes me uncomfortable.
Americans long for a sense of connectedness, but are horribly wary of each other.  Every interaction with a stranger seems to be an armed truce. Unless one of the strangers is trying to sell something, of course.
As the Australian writer Don Watson notes, Americans often use the words freedom and security as though they were interchangeable.  Yet all one needs to do to do is fly somewhere in the USA to know that the two often sit at odds.  For a nation which values freedom above all else, in few other countries on the planet are people so pushed around, restricted, controlled, examined, judged, and just plain stiffed.
Maybe it's just New York.  Or its evil twin, New Jersey.
Master Right and I flew in from opposite sides of the world--he from Kobe, me from Munich--and met at Newark Airport.   We chose to recover from jet lag at one of the many nearby Econo-Snooze Inns.  Inn and Suites, let's not forget.
Right and I scored one of the and suites, with a kitchenette. We figured the airport and its poorly-served surrounds would be a crummy place to try and find a bite.  Better to pop over to a supermarket and grab a modest snack. 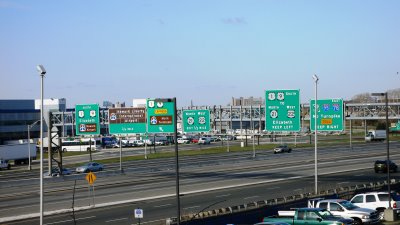 The view from the And Suite.
Not a great strategy.  The knotted hairpiece of freeways around Newark complicates even the simplest errand.   One might see a supermarket across the road, but need to travel a mile or two just to find a place to turn around.  And you'll get lost trying to do it.  Because urban planning, like all government functions in the USA, lives not to promote public efficiency, but to dish up pork.
In the end, we had to abandon the And Suite and eat at the Inn bit.  Now, this being a family hotel, the breakfast buffet the Mario-Hilto-Sheratot or whatever reflected contemporary American family values.  The hot course was a sausage patty and ring of scrambled egg, which one could place on an English muffin, with a shred of cheese on the top.  One could even, at great risk to life and limb, operate a self-serve waffle maker. 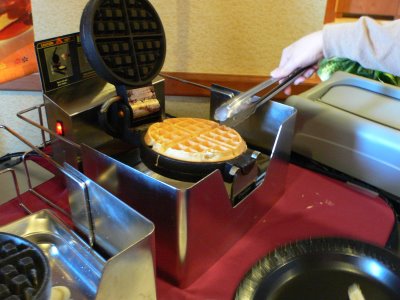 That is, it was a self-serve McDonalds.  These people had managed to de-skill a McJob.
No complaints from the largely family crowd who frequented the place.  There was a school group whose conversation seemed to revolve around what parlour games could be played for money.  One said that he had played dominoes for cash.
Master Right and have a few days to kill before I need to see an accountant in NYC to sort out my American income tax.  We have rented a car--no, let me correct that.  They have upgraded us beyond a car.  We're driving a Tony and Guy hair salon.   They call it a Cadillac Escalade, which sounds rather like a cross between the words escapade and escalation.  Why not talk straight and call it a Cadillac Troop Surge?
We'll keep you posted. 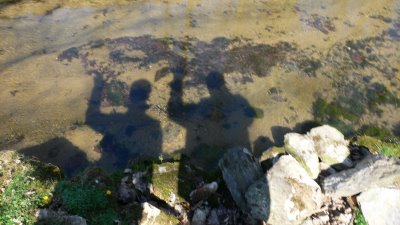