Home The Honourable Husband The International Day to Bite Me Subscribe
For spacious skies
Echoes of Albert, Part Two.

Where is he gay today? Princeton, New Jersey 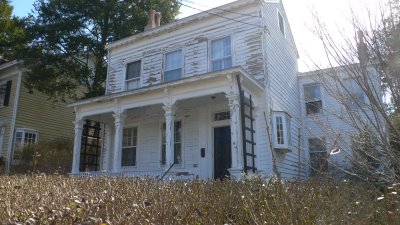 Master Right and I stand before 112 Mercer Street, Princeton. The front gate sports a sign which says Private Residence. Behind that gate sits a modest frame house, probably Victorian, with a tacky 1970’s Hacienda-style front door. Frankly, it could use a paint job. Does this fixer-upper really need to warn passers-by that it’s not a public building? Apparently so. It is the one-time home of a certain Albert Einstein, who lived there for the final two decades of his life, and where he died in 1955.

Princeton is enormously proud to have given Einstein refuge when he fled the Nazis in 1932. But the place shies away from celebrating, arguably, its most famous resident.

Einstein wanted it that way. He deplored the cult of personality which developed around him. You’ll see no Einstein Memorials, Einstein Monuments, nor The Story of Einstein Interpretive Visitors’ Centre in Princeton.

But alas, this is America, and the Celebrity Imperative is hard to shake.

Trees in the newly redeveloped shopping district hint at Einstein. They form a nucleus for circulating electrons etched in the pavement—even though Einstein correctly maintained that his work had little to do with the development of atomic energy. The local clothing shop can’t resist cashing in with an improvised Einstein mini-museum. They sell T-shirts branded with the word Princeton, but they replace the middle e with mc2, since we all know that’s what e equals. Further, I could find no socks in this clothing store. Apparently, Einstein never wore socks. 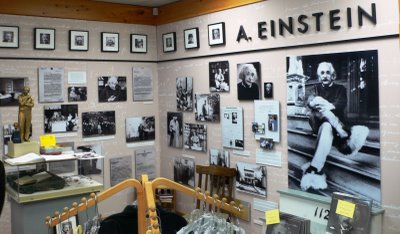 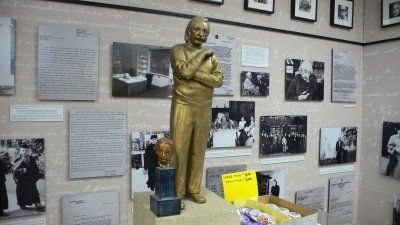 Princeton isn’t the only town that keeps a bit schtum about its relationship the 20th century’s pre-eminent genius. Few people associate Munich with Einstein, but it was here that he spent his formative years.

Einstein was a Bavarian, born in nearby Ulm. His family moved to Munich when he was a child. The Einsteins ran an electrical engineering business, and constructed several substations for the city’s new electrical grid.

The site of the family apartment at Müllerstrasse 5, now a council works depot, sits in the thick of Munich’s gay quarter. Legend has it that Einstein formulated the famous theory of relativity by sensing the relative speed of trams as they passed each other; it’s satisfying to think that he did so on tram #18, the Vaseline Volvo, which today still glides up and down Müllerstrasse.  EDIT: Apparently, it was actually a tram running past the clock tower in Bern.

It was in Munich that young Albert acquired an unfair reputation as a scholastic dullard. He was not, as legend has it, slow to speak, nor inept at math. He missed out on his high school diploma because he had little patience for languages, especially French. His sister Maja joked that the Greek master was right, Albert was a complete failure, since he never managed to become a professor of classical languages.

We can credit his younger sister with much of Einstein’s modesty and good humour. She often reminded her brother that it takes a thick skull to be the sister of a genius, so often did they bang heads in childhood roughhousing. A small memorial to Einstein in Berlin. He worked there from time to time until he fled Germany in 1932.
Einstein was a total sucker for beautiful women and married twice, but he remained devoted to Maja and spent several of his last years reading to her, after a stroke confined her to bed.

Along with his sister, other Einstein family came to Princeton to complete the household; his second wife (and cousin) Elsa, Elsa’s daughter Margot, and his secretary Helen Dukas.

Here’s a little by-the-way. Wife number one, Mileva Maric, was a feisty student whom Albert impregnated in a careless moment. They spent some years together, and many feel she should be credited, at least in part, with Albert’s academic achievement.

Some say that when the couple divorced, Albert was so skint that he found it hard to make a decent property settlement with Mileva. To sex up the deal, he agreed to turn over any Nobel Prize money in the unlikely event he should he win. In the tradition of many ex-wives, Mileva laughed all the way to the bank. 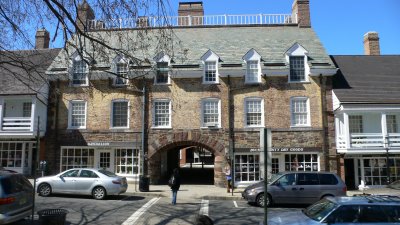 Princeton proved a good match for the Einstein clan. Neither so self-conscious as Harvard nor bourgeois as Yale, Princeton feels thoughtful. Dating to 1742, the colonial architecture of the third oldest university campus in North America anchors the landscape with dignity. A haven for American liberals, the town lends a sense of peace in which humanitarian ideas flourish. Like colonial America itself, the town is a creature of the Enlightenment. 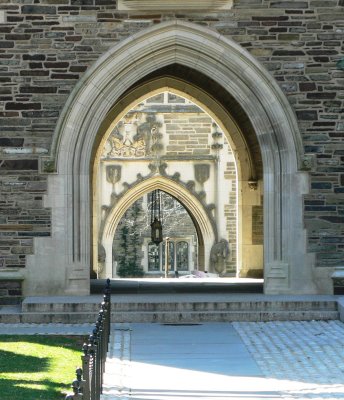 Einstein remarked "I [find] Princeton fine. A pipe as yet unsmoked. Young and fresh.” 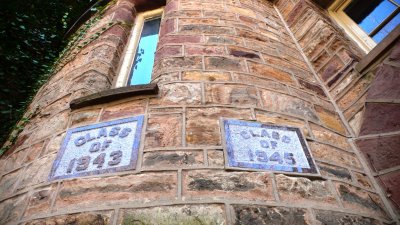 Today, Princeton presents itself much as it did to Einstein in the middle of the century. Geography helps; the town deliberately stays isolated from the brutal commercial development that clings to the Boston-Washington corridor of freeways and rail-lines. The authorities consign strip malls and big-box stores to the nearby suburbs of Philadelphia and Trenton. (Gosh, does that mean Einstein never went to the A&P?) 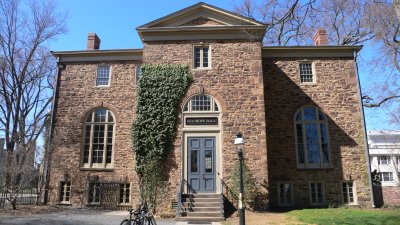 If you visit Princeton, go to the public library. You’ll find a mural, made of hundreds of ceramic tiles. It’s a mish-mash of ideas, history, scraps of thought and memory. 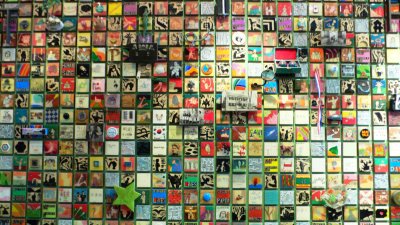 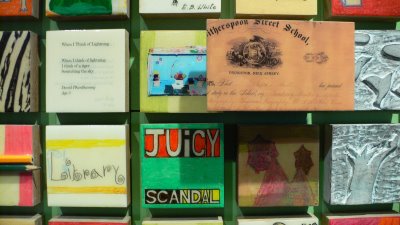 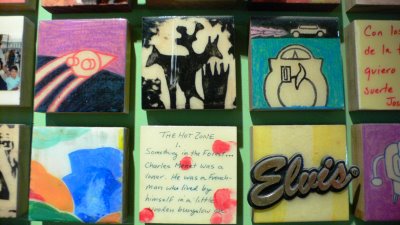 It echoes the chatter of Princeton’s classrooms and coffee houses, its parlours and pavements. And its bookshops, as we will see.

Posted at 12:00 AM in Amerika, Arts and Humanities, Munich, Secularism/Atheism, Where is he gay today? | Permalink | 0 comments