Home The Honourable Husband The International Day to Bite Me Subscribe
And lange, too.
Hamburger makes Pizza! 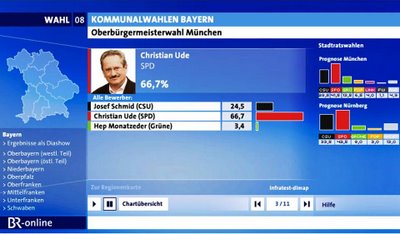 As I so courageously predicted after my first German political rally, honorary fag Christian Ude romped to the finish line in the Munich mayoral elections with over two-thirds of the vote.
Seppi Schmid, his hapless conservative opponent, made a poor showing. Bayerische Rundfunk, the Bavarian equivalent of the BBC and the source of the chart above, called his party's performance " a debacle". Not only did Seppi bite the big one, but his party lost about 20% of its seats on the city council.

Ah, those conservatives! In a desperate move, they reached for a political weapon they didn't fully understand. Humour. 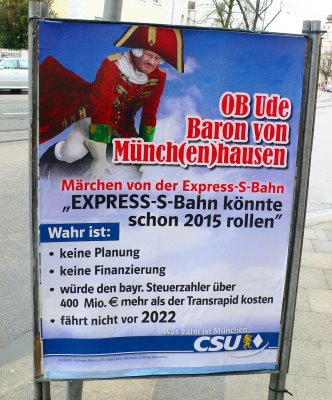 This poster from the conservatives lampoons Mayor Ude for opposing the Transrapid Magnetic Levitation Train project*, which is to link Munich with its airport at the cost of a mere two billion Euros. Ude favours making the current conventional trains run express on a new line, at a fifth of the cost.

A thoroughly ludicrous political position for a tax-and-spend lefty, thought the opposition. (We all know that the right and proper conservative stance is spend-but-don't-tax, true?) They unleashed their Doberman copywriters to make mockery of the mayor's folly.

In the poster above, the Ude is likened to Baron von Münchhausen, grand schemer of preposterous schemes, made famous by the Terry Gilliam movie of (almost) the same name. As you may know, the German word for Munich is München, and just to make sure that you got the pun, the writers cleverly inserted parentheses around it. Riposte!

Sadly for the conservatives, most readers would have thought the comparison fit more neatly to the CSU.

Look, Seppi. When it comes to comes to humour, don't unleash forces you don't understand. Especially when the mayor himself used to be a comedian and has already performed as a turkey without damage to his reputation.

By the way, our pink friends at Rosa Liste earned a vote that stayed unchanged, in spite of a swing to the left. Schade.

* They could use a little help with their English translation, don't you think?