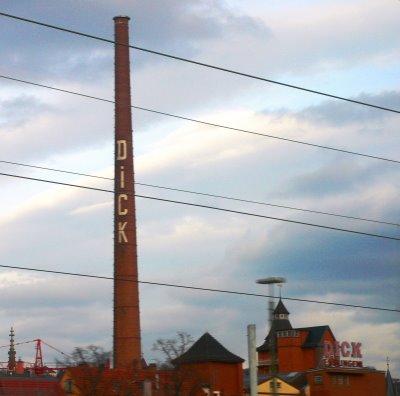 There's something about the little dot on the i.

Posted at 12:00 AM in Engrish, Denglish, and other language matters | Permalink | 0 comments

Beijing. Are you sure this is Communism?

Where is he gay today? The Shiguan Mountains, north of Beijing. 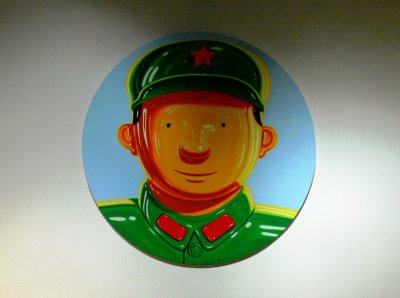 Shen Jingdong: part of the Hero Series. Not sure of the date.
"While we admire our heroes, we should question them, too."

“We have not renovated ze Great Wall of China”, says Benjamin, our hotel tour guide. “You can see renovated parts outside ze grounds. Buses go zere, eet eez like, ‘ow you say, EuroDisney.”

We can forgive him a little snobbery. Benjamin, a French-speaking Swiss, studies at that posh hotel management school in Lausanne. For his first internship, he started at the top—a tour guide for the Commune on the Great Wall, an hour north of Beijing. 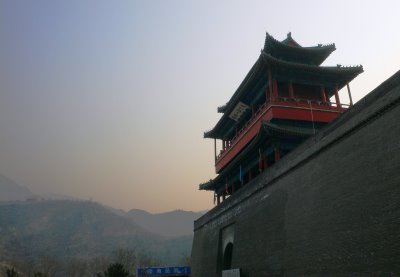 Our last visit to Beijing proved so miserable, my boss and I decided we would stay outside the city. The Commune consists forty-six villas nestled in two rocky valleys, it claims to be the largest resort in the world. Each villa houses around six guest rooms; the conceit is that strangers must live together, like a real commune. This is nothing more than a conceit, since a fleet of hotel cars delivers room-service to your bedroom door. A collective fridge in the kitchen acts as mini-bar. That’s the closest you’ll get to rubbing shoulders with comrades-in-arms.

And the hotel owns a private section of the Great Wall of China. Ah, to get rich is glorious!

The owners and management have created an oasis of art and tranquility in this remote, arid valley. The buildings double as galleries for contemporary Chinese art—China has now overtaken France as the world’s third largest art market. 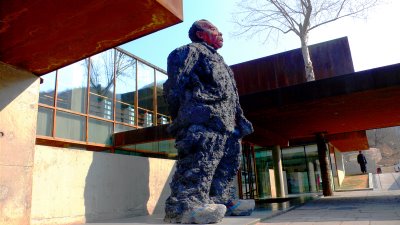 Of particular interest is the work of Shen Jinguan, whose shiny, perfect surfaces and cartoon-like images haunt the observer. 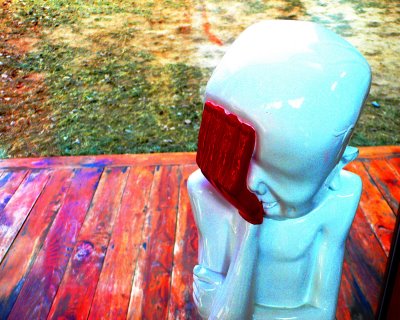 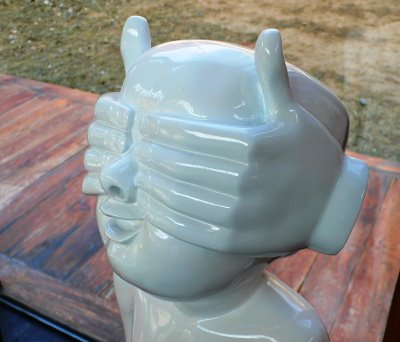 Benjamin is leading the Architecture Tour, a special treat for guests, since the hotel won an award for its architecture at the 2002 Venice Biennnale. 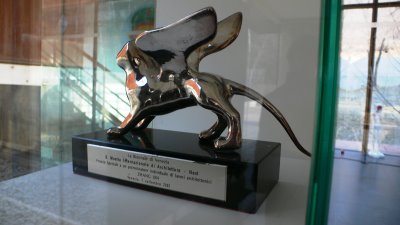 Each villa represents the work of a prominent Asian architect, who holds the privilege of naming the design. 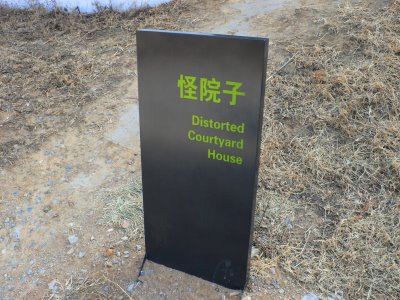 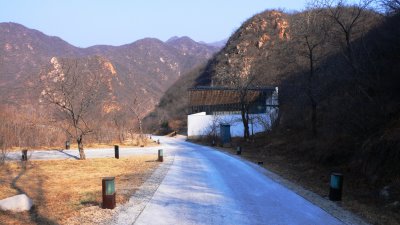 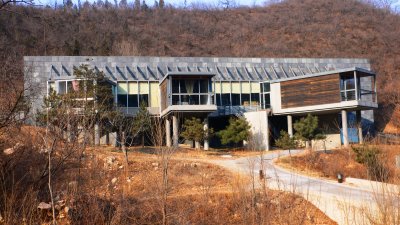 The first house on the tour was the most whimsical. It’s known as the Suitcase. 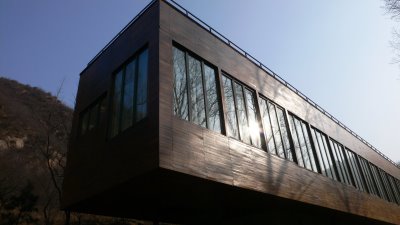 Hong Kong architect Gary Chang wanted to create a house in which each room could be experienced as a vacant space, even though you lived in it. He put all the furniture under the floor, revealable under trapdoors. 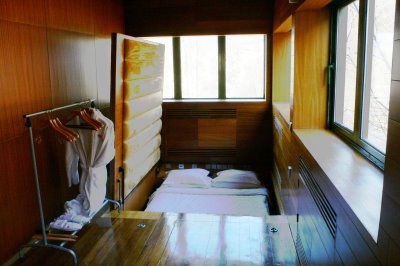 By the way, there’s an emergency buzzer by the bed, in case the lid falls down on you while asleep. 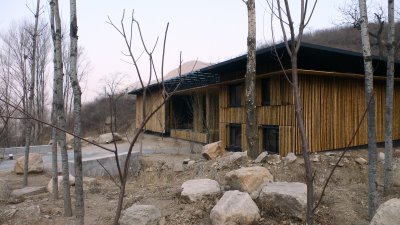 The Bamboo House features a central dining courtyard with a pool that’s filled in summer, so you can eat and maintain your Zen. “Eeet eez much more popular with Westerners than the Chinese.” Benjamin told us. “The Chinese prefer ze Cantilever house, since it eez red, ze colour of happiness and good luck.” (By boss and I stayed in one of the Canilever houses, by the way.)

The view from the balcony of the Cantilever House

The Architecture Tour ended at the path to the Great Wall. The Commune keeps its private section of the Great Wall in original condition, which is another cute gesture toward ideologicaal purity. The climb winds steep and treacherous, through rocky outcrops and severe grades. 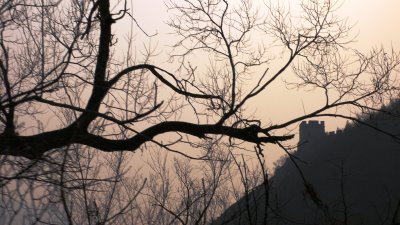 This not only keeps crowds at bay, but the exercise prepares you for the solemnity of this ancient sight. You feel you’ve earned the right to be there. After all, for the Chinese, a visit to The Great Wall acts as a right of passage. Climb it, and you become a man. 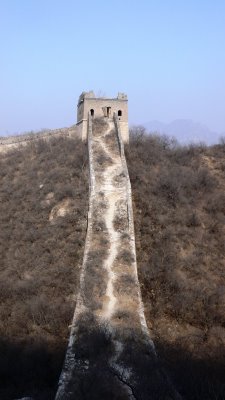 Authentic. With an accent on the ick

Where is he gay today? Shanghai 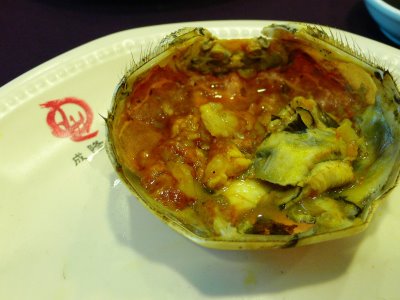 "Is the intestine to your liking, sir?"
Chinese restaurants in the West are for pussies. They spare us from dishes that insult our reckoning of what animal (or its parts) constitutes acceptable food. We rarely get beyond anything more disturbing than chicken’s feet. And few will broach the downright fucked-up shit. Like Monkey Brains Tartare or Poodle Fricassee.

One forgets this, you know. Until you travel to China.

Master Right is in Tokyo trying to sell the apartment. So when I had yet another business trip to China, he hopped a flight to Shanghai and joined me.

We were staying in the brand new Hyatt on the Bund, in the historic foreigner’s trading settlement. Right had a Japanese guidebook that cited a restaurant which was known for the most authentic Shanghai crab in the district. We looked forward to it; real Chinese food, in its home environment.

The rice vinegar was dark and potent…and horribly smelly. The dim sum exploded in your mouth, because authentic dumplings have boiling water on the inside. And everything was kind of stirred-in with half-cooked egg.

Two steamed crabs arrived at the table, and the waitress proceeded to open them and extract the meat. They presented their findings in order of dismemberment; the abdomen first.

First course was the intestine, stomach and various organs. Since a crab actually sports a head and body in one, I’m sure its tiny crab brain sat amongst the eggy goo.

We have thrown away the guidebook. 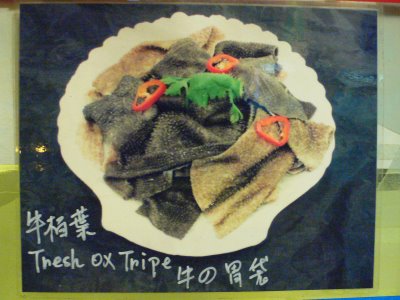 So, is Shanghai any less nasty than Beijing was? Let’s just say this. I asked the hotel concierge how to say excuse me in Chinese. Her reply? “Why on earth do you need to know that?”

P.S. As with previous posts from China, this one is blog-compromised. Writable from within der Volksrepublik, but not viewable. I hope it looks OK. 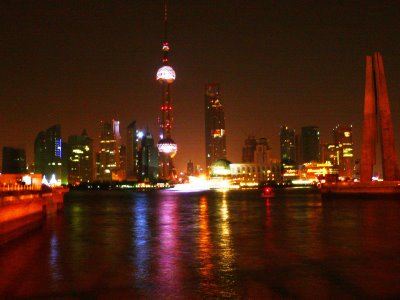 Munich. You can't get gayer than the mayor. 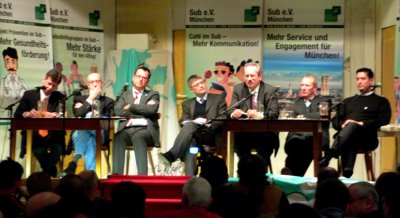 It might happen in San Francisco. It might happen in Sydney. It might happen in Manchester. But most other places in the Englsh-speaking world, getting all the mayoral candidates of a major city in one room, addressing the gay community, would seem pretty far-fetched. In Munich, we fetched it up two Fridays ago.
The organisers held the discussion in a pub in Munich's queer quarter, the Pfistfochviertel.
Though an utter fag, I don't live in this gay ghetto. You'll find me on the other side of the river, sipping chardonnay with my fellow middle-aged bourgeois in genteel Bogenhausen. Luckily, tram #18 passes by my place, and it makes a beeline for boystown. Master Right and I nicknamed this tram the Vaseline Volvo, and I rode it straight to the pink podium.

In Bavaria, the word is par-tay.

The candidates arranged themselves stage-right to stage-left, which was pretty much their spread of politics, from what I could gather. The photo shows 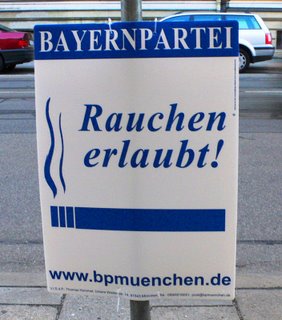 The only parties not represented were the far-left Linke, a remnant of the former East German communists, and the far-right Bayernpartei, or Bavaria Party. The Bavaria Party has only two policies; to praise God and to allow smoking again in pubs.

Now, if you need to listen to political speeches, everything sounds better with a beer. It's a Bavarian tradition to hold political meetings in pubs; Hitler attempted a coup at such a meeting--his famous Beer Hall Putsch in Munich in 1923.

Not much putsching that night in the Pfistfochviertel, though. Oberburgermeister Ude, a former journalist, former lawyer, and former cabaret comedian*, won't be adding former mayor to the list anytime soon.

He governs the city in coalition with the gay political party Rosa Liste, and being a thesp, knows how to banter in queer company. So much so, he has issued an public statement apologising for not being queer, acknowledging his wife of some 25 years.

If he batted for our team, as it were, Germany would be among the most municipally gay countries on earth, with its three largest cities run by gay men. Ude's coming-out-as-straight speech even playfully mimicked the coming-out speech of Klaus Wowereit, the mayor of Berlin: "I am hetero, and it is a good thing."

When asked how he would support the gay community, Ude pointed to his record. The current administration trained police in gay issues, supported the employment of gay teachers, and opened Olympic Park to the 2006 Gay Games. "This is not my world, but I come here gerne." said Ude in his closing remarks. Gerne is a useful German word, that mixes shades of happily, graciously, eagerly, gratefully, and you're welcome.

In fact, it was rather hard for the actual gay candidate to be gayer than his straight opponent. Dr. Michael Mattar, the guy in jeans who looks a little like the Great Kazoo from The Flintstones, is a gay businessman who is running for the liberal Free Democrats. Not only is he as queer as a three-Euro groschen, but his boss, the leader of the federal opposition in the Bundestag, is gay, too.

Both of them downplay their queer cred, citing that such affairs remain private matters. Mattar has criticised the gay community, which is a little rich, since the lesbian sitting next to me told me that one of his businesses is a gay dating website. Onstage, he backpedalled, saying that the gay community played a constructive role as a surrogate family for many who had been rejected by their own.

So, listen up, irony fans. The gay liberal has to deny that he's homophobic. The married socialist is just a little too fabulous to pass as straight. Have we managed to smash every stereotype tonight?

A flap from the right wing.

Er, no. Our dear friend Seppi Schmid, in typical conservative style, reached for the wedge. How to protect gays from homophobic violence? Deport young foreign males, he said. Munich has seen its first ever (alleged) murder on the subway, and the Christian Dems are running a tough law and order line.

Given the fate of Pym Fortuyn, Schmid actually found some support in the audience for this quatsch. But he really put his foot in his mouth when asked how his Catholic faith affected his attitude. His faith told him, clearly, that children thrive only with two parents of different genders.

His foot and his mouth are very good friends, it seems.

In November, sounding like a German Ann Coulter, he described the Socialists as maggots in the mane of the Bavarian Lion, whom he would eradicate. Alas, instead of the word "eradcicate", he used the word "de-louse". This shocked the Jewish community, since "de-lousing" was the pretext on which naked victims were ushered into gas chambers. When confronted, he had to plead ignorance of his nations's history.

Seppi may, indeed, be the George W. Bush of Munich politics. I would say his chances of sitting in the Rathaus, were Schmidhouse.

And by the way, my German is pretty schmidhouse, too. So some misquotes are distinctly possible.

German voice-actors Christian Ude, Verona Feldbusch, and Boris Becker
at the premiere of the German-language version of Disney's Chicken Little.
In German, it's called Heaven and Hen. Photo from ganz-muenchen.de

*By the way, unlike Reagan or Schwartzenegger, Ude hasn't retired from showbiz just because he holds a full-time job in politics. He moonlights as a guest star on TV drama; he even voiced the mayor in the German-language version of Disney's Chicken Little. I don't think his people looked ito it too closely before signing the contract. The mayor is a turkey. So is the film, I understand. 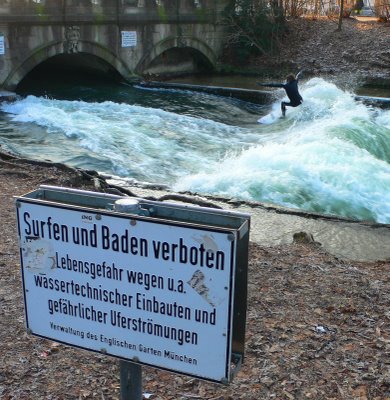 I can't believe these guys are still at it, in the middle of winter. Even after the trees have shed their leaves, so they don't hide the signs that warn of imminent death. 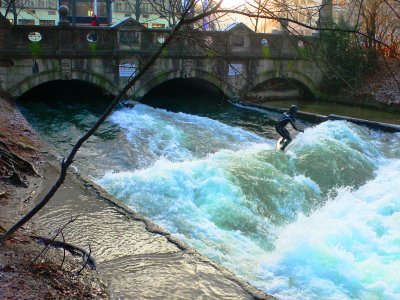 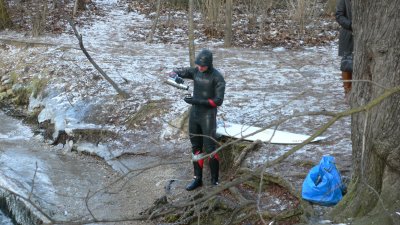