Munich. It's a gay parallel universe. In pink. 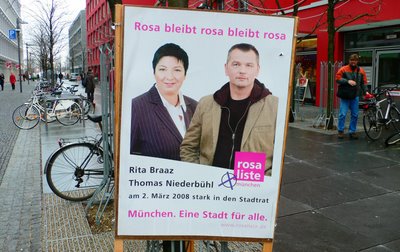 Pink stays pink stays pink, the headline reads. I assume it's a German interpretation of Gertrude Stein's A rose, is a rose, is a rose. The poster touts two candidates for Munich city council, and reminds us that they act as strong, incumbent voices in the assembly. The pair belong to a political party known as the Rosa Liste, or Pink Ticket. Their message ends with the tag line, Munich. A city for all.

It's a gay party. Could you tell?

The Rosa Liste boasts of its success in local politics. They get two percent of the vote city-wide, and eleven percent of the vote in the Ludwigvorstadt/Isarvorstadt ward, which contains Munich's major gay neighbourhood, the Bell Brook Quarter. (Or, as we say in German, the Pfistfochviertel. ) The Greens, the Social Democrats, and Rosa Liste form the political coalition which governs Munich. 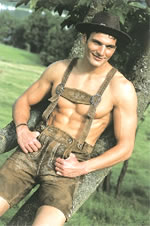 That sounds impressive, especially when you compare it to the paltry gay presence in, say. American government. Uncloseted gay presence, that is.

Alas, it's easier to vote Green than Pink.

But by any other standard, the Rosa Liste performance looks pretty grim to me.

Besides, the most successful gay politicians in Germany work within mainstream party structures.

Klaus Wowereit, the mayor of Berlin and a prominent Social Democrat, came out spectacularly in a speech to his party congress; he used the now-famous words, "I am gay, and it's a good thing." (In German, it sounds much more poetic). He was re-elected.

The conservative Christian Democrat mayor of Hamburg, Ole von Beust, refers all questions of sexuality to his blabbermouthed dad, who once indiscreetly outed him to the press. (May I just repeat that for American readers? He is a gay politician, who is a member of a conservative Christian party. And pop still loves him. Suck on that.)

Master Right and I haven't sized up the gay community here in Munich yet. It looks vibrant, lively, and active. But a little insular.
There seems to be a separate, gayer version of everything. Always painted pink, just so you can tell.

Cocktoberfest
Like, I'm totally bummed that we missed the official Gay Day at Oktoberfest.
For half a day, the Hacker-Pschorr Bräurosl tent turns dangerously bent. If you plug this little report from 2006, and this reaction to events into Babelfish (to your right) you 'll see our boys can get a tad too frisky. Particularly the gay biker leather crowd, bless them.

Rosa Wies'n (Pink Meadow) is an official guide for the novice Oktoberhomo. Much of the advice concerns what to wear.
Should you wish to become a trachtenfag or dirndldyke, the site links to several sources of lederhosen and those dicky checked shirts with Paul Lynde-style kerchiefs that are apparently not gay at all, but just Bavarian.
You can't beat lederhosen for queer beer-drinking kit. First of all they're leather. Second, the fly consists of an upside-down apron contraption that requires only two buttons to release. Ideal for a quick pee, which a dedicated beer drinker must execute regularly if he is to enter the true spirit of the holiday.
Kilts have become popular wies'n wear. Perhaps it's because nothing offers a faster slash, especially if you go regimental. And of course, it maximises any opportunity for a quickie. What does the dashing young lad about town wear under his kilt? An Oktoberfest condom, of course. (you need to remove it to piss, though)

A Very Mary Christmas
The doctrine of separate-but-equal extends to the traditional Bavarian Christmas market. Pink Christmas stands several leagues above the folk version of the custom, with bookshops, gourmet foods and a handsome bar. There's a public stage for performances and speeches. 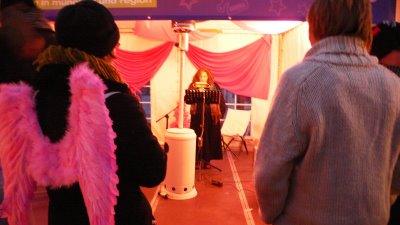 Master Right and I looked for some big fat loud gay Christmas ornaments as a joke for my nephew, but found only tasteful home decor. Which is perhaps gayer than flaming out, nowadays. 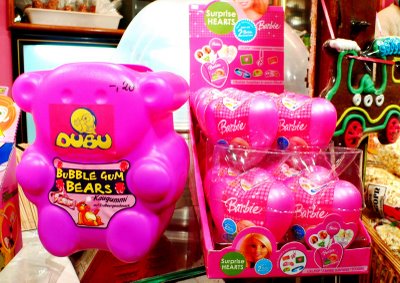 The candy stand sold pink gummy bears and Barbie lucky dips. Can you say stereotype? Under the circumstances, English speakers may easily misread the gingerbread hearts that say I Love You as I Love Dick. 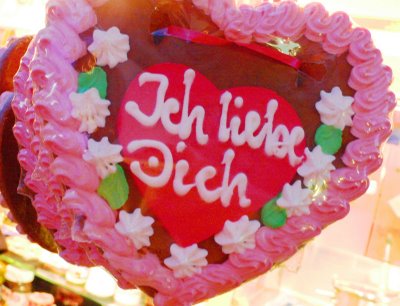 In his gay politics, Yours Truly adopts the assimilationist position. You won't find me storming the barricades with the prideistas. Munich gay life runs counter to my natural inclinations.

On the other hand, Munich is a lefty island, adrift in a sea of conservative rural Bavarians. Perhaps the community felt it necessary to gather its wagons in a circle. Can't blame them for that. But do they really have to be pink wagons?

Rosa Liste will hold a public meeting tomorrow night, where all six mayoral candidates can address gay issues, at a pub in the Pfistfochviertel. You'd never see that happening in America, or even Australia. Though my German is truly sheisser, I might just tag along.

But I draw the line at last Friday's gay community event. The Eiszauber Rink in Karlsplatz hosted the annual HoliGay on Ice. I believe the surface was dyed pink. Isn't ice skating gay enough already?

Pictures of the Oktoberfest condom, the Rosa Wie'n logo, and the lederhunk are borrowed with gratitude form the Rosa Wies'n website. As always, should the copyright owners of the photographs wish me to remove them, I will do so gerne, with an apology.