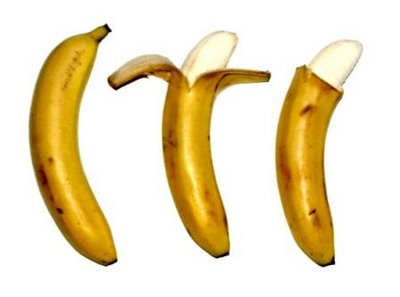 No it's not like a banana. Everybody expects a goddamn banana.

Princess Grace, my #2 fag hag, was on the phone, sizing up her latest prospect for happiness. He is a gentleman with, it seems, a foreskin.

"I'd never serviced an uncut man before. With the top up, it hardly even looks like a penis." She spoke like she'd just discovered a box of stale Pop-Tarts, remembered an errand, or got the wrong frappasomething at Starbuck's. "Hey presto, he gets excited and it disappears. Where on earth could it go? Does it just, like, fall off?"

"Yes," I said, "It falls off and a new flap of skin grows before the next boner."

"I thought you had to peel it like a banana." she continued. "That would be logical."

"C'mon. Imagine sticking it in with shreds hanging down the sides. And when the cock deflates, what does a guy do? Zip up the gussets?"

"Gussets! You're so funny. I bet you call your boner a stiffy!" She giggled for a moment, and returned to business. "Um, I don't see why not. How else would it work?"

"Ooooh. I see. A freezer pop. That makes sense now." She paused. "Are you sure that's how God designed cocks?"

"You Americans..." I sighed, "How could a sexually active woman reach the age of (censored) and not face a foreskin?"

"Well, Mr. Been-Around-the-Block-on-His-Knees, I've been choosy about the dick I suck."

"Me, too!" I retorted, knowing this applied only if measured by gay standards. "I knew how uncut dicks worked long before I started sucking any."

"Circumcision? Dad wouldn't hear of it...and no doubt wouldn't pay the extra $200, either.  Many men of his generation weren't cut.   Did you ever see your father naked?"

"Maybe you should ask your mom about it."

"I don't think she's ever seen his dick, either."

"Well," she interrupted, "not just that. She's usually...um, facing the other way."
Long pause for mental picture.

"Don't ask me how I know this." she cautioned.

Posted at 12:00 AM in Assorted Faggotry, Men and Their Minds, Stupid Slice-of-Life Shit that's Supposed to be Charming, The Husband's Most Honourable | Permalink | 0 comments 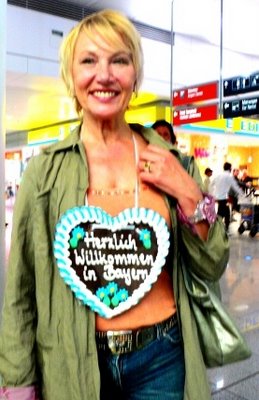 This woman greeted me as I emerged from customs at Munich Airport. Well, she didn't actually greet me personally, since she was there to meet someone else. Still, I took it as a good omen.

From that, you may gather that I have arrived in my new home town, and am very, very happy to be here.

Let’s be blunt. The Honourable Husband's clan lives in junkyards. None of us can throw away a damn thing.

Clinicians look for hoarding as a marker for family dysfunction or mental illness. When you grow up amid chaos, never quite certain that your home is secure, the instinct to hoard against catastrophe is palpable. Even if the gestures are largely pointless, they hold great symbolic power.

A teetering pile of wood scraps, too good to throw away, englfed half my father's workshop in the basement. He got rid of some when the oldest scraps began to rot.
My mother kept the ends of balls of yarn with the view that they should be used one day. They were, knitted into one long crazy-quilt scarf that nobody wore.
Speaking of crazy-quilts, my sister took up quilting and became quite good at it. She had ready access to scraps of material that were—you guessed it—too good to throw away.
My brother and sister-in-law once invited me to help them sort out their spare room. They disinvited me after a morning’s efforts. Silly me, I thought the idea was to throw stuff out, rather than examine it at length, discuss it, and dream up new reasons it might be useful and should be kept—which is apparently how the Honourables are supposed to clean house. Of course, it was easy for me. It wasn't my stuff.
My own stuff? The mere thought gave me the chills.
My 950 square-foot apartment in NYC (Gott in Himmel! A palace, by New York standards) was packed tight with useless garbage, cunningly concealed, some of it not even unwrapped since my move from Tokyo, now two and a half years ago. That shipment weighed eight thousand pounds. Even if my new employer is paying, there's no excuse to put that much on a boat again.
But that's not the sickest bit.

I travel a lot for business, you see. The moment you park your butt on a business class seat, they give you these quite substantial bags of toiletries and sockettes and eyemasks and earplugs and such. It seems such a shame to throw them out. I mean, what if you're trying sleep in with a hangover and it just happens to be the day when the curtains are at the cleaners? You'll thank your lucky stars that you didn't toss the eyemask. See? I told you so.

And hotels. The shampoo and hand cream and conditioner. I mean, they’re free. Why not? These ended up in the second bathroom, so my guests could enjoy the illusion of staying in exotic places (usually an exotic Hyatt) as they bunked out in a sleeping bag on the couch. And even though I am almost completely bald, I always steal the shower cap just on principle.
The cupboard under the guest bathroom sink was filled with second-hand luxury toiletries. So was the medicine cabinet. And two more cartons in the closet. This is the executive version of becoming a cat-lady. 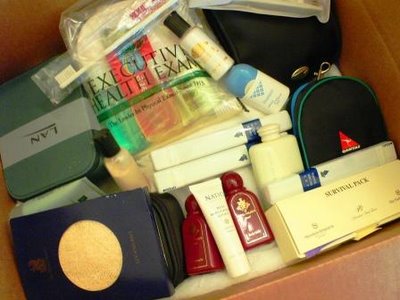 I managed to craigslist a lot of electrical items and sporting goods, which yielded a bit of cash to salve the insecurity. I tossed out a huge pile of old magazines, which pained me; feature articles are amongst the most brilliantly polished writing on the planet today. But it's all backed up online, now, in our brave new century.

So is much of our musical heritage, but that didn't help when it came time to unload my vinyl LPs. 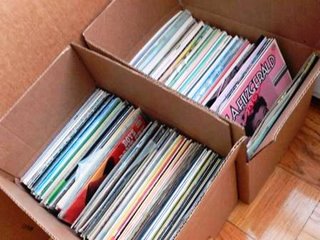 Conveniently, I was 23 when they first started to market CDs. I'm a pretty reckless buyer of CDs, but sure enough, when counted, the LPs outnumbered the CDs by a significant margin.

In the end, I could only bear to part with about half of them. I sold them as a job lot to a young gentleman from skint-but-trendy Astoria, in Queens.

He had just bought his first turntable, and with his limited spare cash, was buying firmware. I remarked that he might like to turn around and sell some of the records individually, and perhaps even make a profit. No, he said, he simply couldn't bear to part with something so interesting and precious as music. The records will stay on his shelf forever. Ah, a man after my own heart! I nearly gave him the whole lot, but regained my sanity in the nick of time.

Naturally, the airline and hotel shit simply had to go. Not to mention books I’d read and hated, clothes that no longer fit, pictures for which I’d no wall space, cheap chipboard bookcases which cost more to send around the world than to replace, and the inevitable exercise bike that turned into a coat rack.

Now—please doctor, just one more puff—all this is too good to throw away. People could find it useful. Some might even pay good money for it. So I called the Salvation Army.

The doorman sent the truck driver up to my apartment. A splendid young man who sported muscles of the kind you can get only from moving furniture. Alas, he didn’t get much of a workout.

“Well, you see, we can’t take those little bottles of shampoo. We don’t know what’s in them and we can’t sell unknown stuff and have someone sue us over it."

“Can’t you use it in your homeless shelters? A few of those guys could use a little upward fragrance adjustment.”

“Not even this fine loofah? It comes from the Ritz-Carlton.”

“Is that some kind of cracker?”

“Never mind. You can just take the other stuff."

"Hmm...I'd better just check it out, first." He sifted through my goods like a paramedic on triage duty. Too-good-to-throw-away turned into not-quite-good-enough-not-to-throw away. 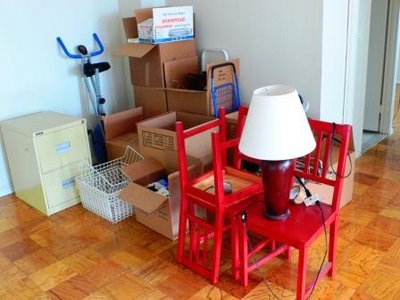 Well, like duh. Of course they're worn, I countered. He explained to me that there were plenty of rich people in New York. They bought clothes and wore them once, and sometimes not at all. Salvation Army thrift shops were filled to the brim with much more saleable fashion than my humble garb.

Further, the electrical goods could prove dangeous; the chipboard bookshelves would cost more to transport and distribute than Ikea charged for them retail; and everybody in New York wants to get rid of an exercise bike they bought because it was cheaper than membership at Equinox.

Several thoughts entered my mind. Yet more insufferable New York snobbery? Yet another snub of a heathen by the church? Then the obvious struck. My worldly possions were crap.

I cannot tell you how much it upset me.

Thankfully, after a hefty tip, the building super and his crew of doormen dealt with everything. I hope they enjoy the loofah. And the shower caps. You see, all of them still have their hair.

Posted at 12:00 AM in Men and Their Minds, New Fucking York, Stupid Slice-of-Life Shit that's Supposed to be Charming | Permalink | 0 comments