Home The Honourable Husband The International Day to Bite Me Subscribe
Smutty bars. And the butts who smut them.
Ladies and Gentlemen of the Academy...

I'm a cheaper drunk than I thought. 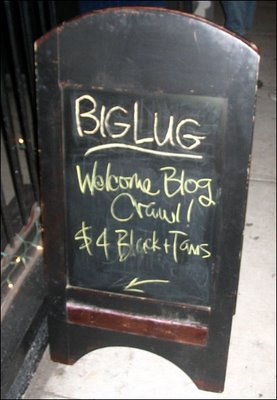 The second annual NYC Blarg Hop turned out to be a smashing success. Well, I got smashed, in any case, and did so rather early in the evening. Four beers, and I was a train wreck.

Now, there was a time when four beers were just an appetiser. My working-class bohunk liver metabolised alcohol like a blast furnace eats pig iron.

But with the big five-0 a mere five months away, my liver has stalled. Of course, one could opt for lite beer, but that means the terrorists have won.

You can cram a lot of conversation into those four beers. All of it interesting, witty and smart. Plenty of blogging tips to go around (special thanks to futurejunkie for moo). Warm, wet love to all my fellow bloggers for a great evening, and of course to Joe for being the chief catherd. That is, the guy who tried to herd the cats from one bar to another. Get it? No, I didn't think so.

One thing became abundantly clear last night. Obscure jokes just don't work. About one person in five got the High Maintenance Hags joke. And this, in a room full of gay people. (Several had remembered the cross-section of male genitalia, though. It figures.)

Circle in a square confessed that fag hags didn't play a big role in his gay life. "*They're really just wannabe gay men in women' bodies. And personally, I prefer gay men in men's bodies, don't you?" Can't argue with that.

The charming Curly McDimple played vixen's advocate on a number of subjects. Subject one: she's a lesbian who hates cats. "Dogs, I can understand. You pat them, they love you, you feed them, they love you some more. But cats...you never quite know what they're thinking, except you know it's not nice."

I warmed to the theme. "No matter how well you feed them, cats will hunt just for the sport of it. And bring home the little bird's head to gross out Mommy."

"If a cat comes in the room and starts giving me the ol' stink-eye, I'll ask the owner to remove it," Curly admitted. "And cats...it's all conditional love. Withholding affection is their emotional power trip."

"I think that's why straight women love them so much. They're like boyfriends." Curly's quizzical look led me to believe that point needed further clarification. Perhaps she's a bit hazy onthe whole boyfriend thing. "You know, on one occasion in twenty, he's affectionate. And that only makes the woman more dedicated, and she redoubles ther efforts. The psychological theory of intermittent reinforcement..."

On hearing the words psychological theory spring from my lips, I knew I was drunk. Lucky that the petite dynamo Helen Damnation appeared; splendid to meet the woman behind the flirty message posted earlier.

Curly and Helen billed themselves as co-vaginas for the evening, and both were nicely lubricated at this stage. Helen revealed that Curly's parents were Glaswegian, which unleashed a dam-bust of bastardized Scot-speak. I'll doo yeue, Jemmeh! Which, of course, we thought was funny.

Several embarassing pix were pixellated, which all will disown in years to come, should we decide to run for Congress. It wasn't just the pictures many of us would disown. There was an odd vibe in the room: so many bloggers knew the intimate details of each other's lives, yet guarded their public anonymity with care, lest they be dooced.

One of the bloggers who made the decision to publish under his real name was R.J. Keefe, a splendid, erudite man who describes himself as a purveyor of Civil Pleasures. "I made a policy decision early on. It's so easy to discover the person behind the blog, there's no real point. I'm a retired lawyer, so I know where to be careful."

R.J. and I enjoyed some truly civil chat, in the midst of all the drunken petting and beefy go-go boys. To top off an evening that challenged stereotypes, we spent some time agreeing that the French seemed much less rude lately.

George and I spoke on the phone earler that evening. I told him that I intended to go out on a pub crawl , and he warned me. "Drinking with a bunch of people you've never met? Don't get too drunk. Make a good impression. Remember your dignity."

Thanks to my crash-and-burn liver, I couldn't get too drunk. And in its own way, the 2007 Blarg Hop was a splendidly dignified affair. We were only there to blog about it, anyway. Weren't we?

*All direct quotations are from memory, and therefore, at best, approximate. Plus, I just made shit up. Photo lovingly stolen from Curly McDimple.

Posted at 12:00 AM in New Fucking York, Stumbled onto While Drinking | Permalink | 0 comments