Sexual Lampoon's Tenessee Vacation, Part Two. A night at the gay B & B.

A little clue to our final destination. We're in the South, as you can tell.

Here's where we left off the story. Master Right asleep in the Goddess’ ample breasts, Senna firmly in charge of the map. Unbeknownst to us boys, Senna and the Goddess' relationship is on the rocks.

Senna was being coy about our final destination—we knew it was somewhere in eastern Tennessee (my guess was Gatlinburg, a notorious tourist trap)

Our immediate goal, though, was a B&B on the Carolina border, which we’d picked out on the inetrnet at a cafe in Asheville. We scanned the listings of B&Bs, looking for code.

You know the sort of thing: Your hosts Jeff and Greg have lovingly restored this eighteenth century farmhouse to a grand rural idyll. You'll find antiques in every room (courtesy of Greg's business as an interior decorator). Snuggle with your partner under down comforters as the gentle scent of potpourri envelops you, and let Jeff's signature cognac eggnog send you on your way to dreamland...

"You gotta get gay guys," insisted the Goddess, unashamed of a little stereotyping. "No raised eyebrows, no early checkouts, and not a speck of dust. What's more, they make spectacular breakfasts."

Master Right dreads these showoffy gay breakfasts. We once stayed at a splendid gay-run B&B in western Pennsylvania which was, indeed, spotless. We let the eggnog send us to dreamland, big-time.

The next morning, breakfast was was a delicate French toast made with egg whipped so mercilessly that the bread floated like a leaf on a lake of maple syrup. The Jeff-of the-moment piled the toast high with apples and cinnamon, feted it with ripe peach and blueberries, and crowned it with a gob of rapidly melting butter under a gooey stack of whipped cream. Right declined the whipped cream, I notced.

When we got into the car afterward, he dived for the back seat and opened a bag of potato chips. Breakfast for Japanese has to be salty, usually smoked fish. He loves that gay-boy goose-down, but spare him the french toast. 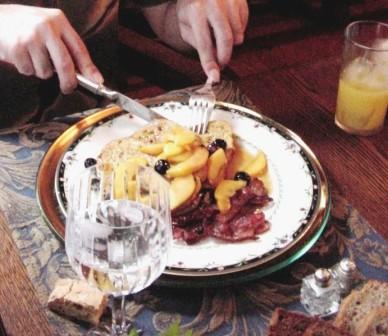 Not a lot of reading between the lines to be done in western NC. But we did spot the Talullah Inn, run by a cetain Pat and Sam. That could swing either way, so we gave it a chance.

Pat welcomed us, an old-school lesbian in the girl’s-hockey-coach mold. The Master checked that in addition to the usual sweet stuff, he could count on a nice, salty, meaty, heart-attack breakfast.

Breakfast couldn’t come soon enough. Jet-lagged, we were up half the night. I tried to teach Scrabble to my beloved, but being Japanese, he couldn’t see the point.

Scrabble doesn’t travel well outside the English language. It’s not so easy to add an "s" or "ed" to the end of a word and cream the points off someone else's labor. You often need circumflexes graves and acutes to make plurals. I have a version of Scrabble at home that’s in German, and there’s no way you can add an umlaut, often necessary to build on another’s words. 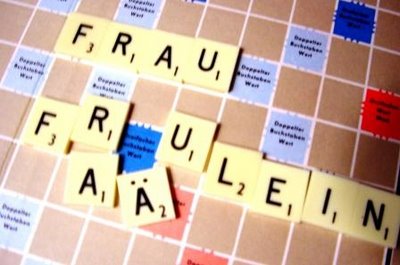 Why Scrabble works best in English.

If Scrabble were to do a Japanese version, it would spell out complete sentences and not words, and would require about three thousand tiles, without duplicates. We tried card games, but who the hell has played cards in the last fifty years apart from Microsoft Solitaire?

Awake at six, I ventured into the parlour to download some email. Two middle aged couples from Atlanta looked up from their chat, and smiled when they saw my laptop. Ah, an industrious member of the Puritan merchant classes, they assumed.

The suburbanites spent a long time introducing themselves—necessary, since they all had such similar names. "HH, this is Larry and his wife Lori, I'm Louis and this is my wife Laura..." Louis or Larry was broker to the other couple and they were bitching about greedy unionised workforces in the companies they had a piece of.

They'd just finished their morning prayers and were about to take a constitutional before breakfast. I expressed polite regret that my pressing emails wouldn't let me accompany them. "Never stops, does it?" Louis smiled.

A little while later, Master Right and I joined the girls in the dining room. Senna looked with dismay at the bacon-and-sausage platter. She'd just turned vegetarian; not a rabid, doctrinaire vegetarian, but more your soft-pedal lacto-ovo-pisco type.

The Goddess scarcely missed a beat, though. "What bacon! So crisp! I can't stand flabby bacon." She turned to George and winked, "I guess you guys like your meat stiff too, dontcha?"

He didn't quite get the joke; stiff meat isn't part of our hybrid Japanese-English lovemaking vocab.  Hell, who needs words anyway, when your mouth is full?

"It may start out a little chewy, but it generally gets better by the end." I butted in. "I'm a little worried about you, Senna. Maybe Pat can rustle you up a kipper? You do eat fish, don't you? Or at least something fishy, my dear?"

"I'd love a smoked fish. Because my fishy bits sure weren't smokin' last night," The Goddess muttered, through pursed lips.

"I like fish for breakfast," Master Right said innocently.

All this made it very obvious to the Atlanta foursome exactly what kind of couples we were.

I passed LaurieLoriLarryLouis in the hall.  Previously chirpy, they refused to meet my gaze.

Senna and I mentioned this to Pat and Sam. We assumed they'd be horrified at homophobia, however trivial, under their own roof.

Pat was sanguine. "Sam and I present ourselves to guests as business partners, not a couple. It's just too dangerous. We list ourselves in Purple Roofs, but classify the Inn as gay friendly, not gay operated. All we need is some good ol' boy in the town to pick up on it, and we're through."

As we drove away we pondered how to piss off  LarryLaurieLoriLouis. The Goddess wanted to slash their tyres.  Master Right suggested that we should all just live happily ever after, out of spite. Senna replied that it was good in theory, but might be difficult under the current circumstances. She looked straight at the Goddess.

But hey. Guys are oblivious to relationship tension short of violence, eh?  As we approached the Tennessee border, Master Right and I were more interested in our destination. Senna came clean. We'd be paying a call on an icon of lesbian loveliness. Next stop, Dollywood.

Posted at 12:00 AM in Amerika, Assorted Faggotry, The Husband's Most Honourable, Where is he gay today? | Permalink | 0 comments