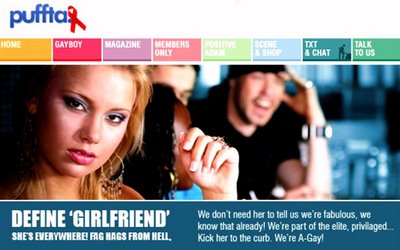 The authoritative 'zine Queerty (who should really spell it Qweerty to get the joke, no?) pointed to an article about fag hags in the British 'zine Puffta.

For the record, Puffta is part of the Millivres Prowler Group, a diverse company that dips a toe in all things gay and sexual. They publish Gay Times, the slick rag-of-record for the UK gay movement that makes The Advocate look puny. They run a terribly upper-class sex shop in Soho, too.

Puffta is a 'zine aimed gay teens--for the moment, let's put aside the ethics of whether one should target these guys commercially. They lit on a fact of teen life: mosk kids pick up a best friend.

If you're gay, that pal is likely to be a girl. And the pufftas ain't happy.

"Pufftas of the world unite to defeat the phenomenon which is the over-egotistical fag-hag – a plague that’s been sweeping the nation ever since Sex and the City...[W]hy do you insist on mind-numbingly boring coffee sessions in which we can pretend to be interested in your disgustingly heterosexual relations with a man who can’t look after himself, perform properly in bed or make you as happy as you want. As much as we do care, we don’t."

"I’m probably taking this too far but I’m just fed up of being nannied by a mother figure. I hate being talked down to and the trap that most of our hags have fallen into is one of giving patronising advice and making us into their accessory. We know gay men are great; we sleep with them all the time, but please, give us some space. We do love you, almost as much as you think we do, but stop acting as if you know that. We did dressing up in mummy’s clothes a long time ago so we don’t need to be your plaything anymore."

I would have put it a little more kindly--and used more punctuation--but yeah, I get where they're coming from. Here's a slightly different spin.

Maybe nature intended that. Young men are concerned with achievement; slaying the wildebeeste, kicking the goal, building the bridge, landing the job, closing the deal, or, um...how shall I put this? Reaching the honey pot.

When a young woman marries a young man, she teaches him about love. Love is a tough gig, and he needs her help. Men often outsourced their emotional lives entirely to the women around them. Traditionally, I guess fag hags played that role for the gay male. These young women taught emotional maturity to their fag buddies, since they didn't have wives or girlfriends to do it. 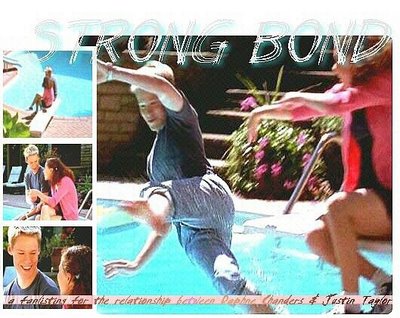 That's OK, up to a point. But with the advent of feminism (a predecessor and complement to the gay movement), men began to mature emotionally at a much earlier age. They had to. Women insisted on it.

Men discovered that maybe, just maybe, the female model for an emotional life ain't the only one. Maybe men can learn lessons from each other. And so they did.

Did the average fag hag peak too soon? She understood the human heart early in life. She built young gay men into adults (because young straight men weren't interested in her advice). In a world that dissed them, she reassured her homo friends that they were fabulous, and their self-esteem grew. Her pals blossomed, strong and independent. She found it rewarding.

Later, she finds the only men who need lessons in emotional maturity are...well, the emotionally immature.

Here's a thought. You hags--take a little time out form your accustomed social role. You won't be the most emotionally mature person in the room forever. Some of your pals will, like Pinocchio, move from being a puppet into a real, live boy. Many of them are already wiser than you. (Men are quite good at growing wise, actually.) You probably still have life-lessons to learn. Take time out to learn them. Enjoy it.

And in spite of what they write in Puffta, we still love you.

Posted at 12:00 AM in Assorted Faggotry, Men and Their Minds | Permalink | 0 comments