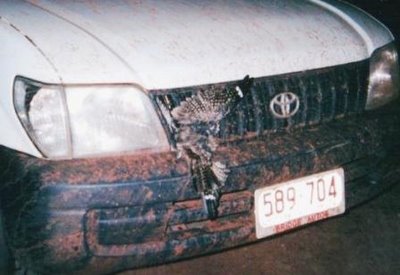 Think about birds in front of you as you drive down a country road. They seem to be frolicking about, oblivious to the speeding object that threatens destruction at any moment, and only get out of the way in the last second or so.

I am told that a bird's heart beats so fast that their sense of time is compressed; to them it feels like a dawdle. I often used to wonder how fast one would need to go in order to catch a bird by surprise.

It's 165 kilometres an hour, I disovered late one night on a road between Uluru and Alice Springs.

This comes to mind because I have just read that the Northern Territory government in Darwin has, for the first time, enacted a speed limit for outback roads. No more fun for us leadfoots.

Princess Grace was in the car with me at the time. She thought it was kinda cool.

Posted at 12:00 AM in Australia, Stupid Slice-of-Life Shit that's Supposed to be Charming, Where is he gay today? | Permalink | 0 comments

Letter to a Christian friend

Many thanks for your thoughtful email about my blogpost on the outing of Reverend Haggart.

I worried that the personal philosophies which only blogs seem able to reveal would lead us into such a place. Belief is so very central to the core of one's being, that any discussion of it runs the risk of sounding like an attack on the believer himself. A good argument to keep one's religion a private affair. ("So, go on, HH. Throw yours out on the internet, why don't you?")

But remember, I was raised a Catholic. My birth-church was as close as one could come to a factory for atheists. Those who remain Catholics are tortured souls. Or, to use existentialist language, they live in very, very bad faith, indeed.

Rest assured, I am a political atheist rather than a theological one. Living in America again has kicked me up the ass (read arse to you quaint English types) when it comes to belief.

For the record: I believe in the persistence of the soul. I felt it. My father. His mother. My maternal grandfather. And his wife, my grandmother, whose weight of scorn I feel every day; so much so that I need to trot off to Al-Anon meetings. Lord Denning's mother, whom I knew. Even—nay, especially—our friends the father and son who died within a month of each other.
In gentler times, I guess I would have been called a secularist, a humanist, or if I had to be churched, a Unitarian Universalist. (My high school deputy headmistress died in office, as it were, and she was a Unitarian. I attended her memorial service. The dignity moved me.)
I agree with your point: a clever God could create evolution. In fact, He probably did.
If a scientist looks at evolution, he notes plenty of evidence for it. It does, indeed, work as science describes. Few, though, venture an explanation about how it seems to work so quickly—which, I understand, it does.

Some other energy is at work apart from sheer chance. But that energy works through the mechanism of chance, rather than through direct intervention--the parts of the bible in which god speaks directly or intervenes in earthly affairs, well, that's something I can't believe.

If there is a God, the mechanism of chance and coincidence is how He works; no wonder people say He works in mysterious ways.

Arthur Koestler's The Roots of Coincidence seems to make a plausible case for this kind of idea, though I don't buy all the rest of the stuff he writes about parapsychology. Better, I've come to know a few people from Seed Magazine, who maintain that the beauty and passion of scientific discovery has a spiritual quality. An interesting bunch of people.

I believe that. Fine. OK. Sure.

But frankly, in the United States in 2006, that don't amount to nuthin' belief-wise. If you haven't accepted Jesus Christ TM as Your Personal Savior TM, you're filthy, godless, and unsaved. An American does not have the luxury of keeping religion a private matter; it's so in-your-face, that saying no-thank-you to the promise of salvation excites distrust, suspicion, and, yes, prejudice.

I call myself a Rationalist. By American standards, though, I'm an atheist. (And a New York registered Democrat, which to middle America, is the same thing)

I have thrown my lot in with the godless and actually attended some political gatherings that support the separation of church and state. And you know what? The atheists I met are more moral than any American ChristianTM I've met.

(I have accepted the homeless guy on the corner of 46th and 2nd as My Personal Beggar, though. I nearly weaned him off god-blessing me when I give him a buck, but the habit of a lifetime is hard to break.)

In fact, Riz, YOU are the only Christian I know who acknowledges that the Bible contains contradictions. To my mind, that kinda blows its cred, no? Further the Bible seems a pretty poor moral guide to life, especially Leviticus.

Posted at 12:00 AM in I was just thinking, Secularism/Atheism | Permalink | 0 comments

Things are looking up 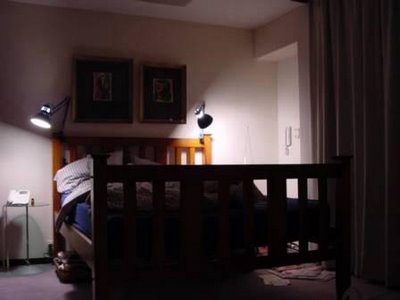 This is a fictionalised entry from a journal, dated January 1996. The author has come a long way.

Despair drives me to bed.

The longer I stay in bed, the more I neglect.

I neglect to exercise. That’s why I need a gym membership, because I don’t have the time for leisurely walks, with the demands of going to bed. Of course, I neglect to visit the gym, too.

I neglect housework. I fired the cleaner because her schedule clashed with going to bed.

In the sink, the water I pour into the used crockery, in an attempt to keep food from solidifying on the side, is putrid.

Newspapers cover the floor pretty much from one wall to another, except for a patch in front of the bathroom door where I stand, daily, in wet feet. I gave up buying newspapers some time ago, since their news is old by the time it gets to print, I have no interest in the editorial content and no spare cash to expend on the advertised goods.

The TV stands alert in the corner, its red pin-prick light aglow, waiting for me to watch. If I press channel selector buttons—up or down—it springs to life and litters my environment with cheap emotion. People shout, kiss, die, cry, laugh, declare love, and shake one another by the shoulders before they speak, sotto voce, of shocking, life-changing facts.

It persuades us emotions are plentiful. Hence, they’re cheap. Genuine emotion is, in fact, rare. And the cost is ruinous.

You see, few facts change my life very much, and those that did, I have known for a long time.

I have not balanced my chequebook for several months. I pay bills only when the windowed envelopes look too numerous and menacing to ignore. I have not submitted my tax return for the last three financial years. Haircuts, dinner parties and trips to the supermarket are almost completely out of the question. I have given up shampoo as too much trouble, and simply use soap. A suit of mine has languished at the dry-cleaners, unclaimed, for seven and a half months. I’m not entirely sure if my car is registered, nor whether the worn tyres make it unroadworthy. But I drive it to work, still. You see, sitting in a car is less like not being in bed than using public transport.

Here are two things I leave my bed in order to do. Work, and drink.

Leaving work aside, it may occur to the intelligent reader that one may, conceivably, drink in bed. In fact, I do. But you can’t really drink. Not really.

I pace the room, rehearsing jokes, composing the ideal guest list for my next dinner party; dreaming of chic new haircuts and the brand of shampoo I’ll buy on my next visit to the supermarket. A fulsome, rewarding visit, my trolley groaning with goods advertised in the broadsheet press. .

Not too many advertised goods, though. My friends, whose charms wax with every sip, would baulk at mass-market packaged food. They demand freshness, novelty, and a creative mien to what they see on my table.

I stress at this point; it’s not personal. My friends hold high standards for everyone. In fact, it’s not really friends who set the pace. People I know and whom I don’t like, set my standards. Shallow people, unthinking people, all quick to judge but slow to understand. They’re the only ones who bother setting standards. Their standards run my life--impossible to live up to, but unacceptable to miss. Standards have little use but as instruments of condemnation. That's what they're for.

When sober, I avoid friends. Should one friend want my company on a Thursday, I will regret that I have a prior engagement with another. The other friend will be avoided by a long standing date with the first. As you might expect, the two unsuspecting friends sometimes encounter each other, remark curiously on my absence, and proceed to enjoy each others' company. A marriage and several one-night stands have resulted.

In fact, that's my ideal dinner party. All my friends enjoying each other's company, delightful interesting people who are a credit to my own delightfiulness and interestingness. And me alone at the Café Blue Danube, ordering the goulash and reading The Age. 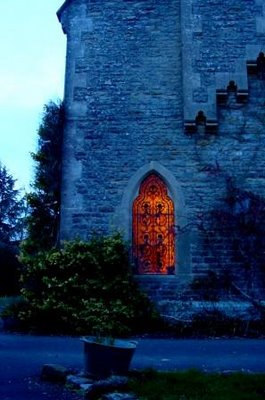 I rather look forward to my funeral. It'd be the ideal Honurable Husband dinner party. All my marvellous, long standing, generous friends, in one room together, and me tucked away somewhere nice and comfy. Mental note: leave instructions to close the lid. I'd like some privacy.

Unless I've had a few, of course. Then I'd want to join them, dazzle them with my repartee, and be the centre of attention. Wouldn't I?

Here's the source. It seems that you can only write moral truth in America if it's done in jest.

Why did the Haggard behave in such a bizarre fashion at the end of the interview? We now know. Dawkins made the list as one of the world's sexiest men, according to Salon.com. The poor Reverend Ted was aroused.

Posted at 12:00 AM in Assorted Faggotry, I was just thinking, Secularism/Atheism | Permalink | 0 comments