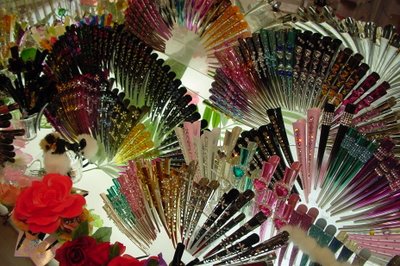 OK, you're a single female. You have a gay male friend. In fact, you have several. Does that make you a fag hag?

Almost, according to my Hag Numero Uno, Miss Betty Ford.

"Well, that does it!," she replied after I came out to her. "Whenever anyone said 'Betty, all your male friends are gay', I could say, 'No, there's Honourable." She sucked deeply and theatrically on a Marlboro Light, and stared into the middle distance. "Now I have no straight male friends. I'm officially a fag hag."

I put my arm around her shoulder, conscious that this gesture no longer counted as flirting. "Haven't left you much wiggle room, I guess."

It took only a nanosecond for her to move into action. "You're 35. It's a little late. You want to be gay, sunshine? You'll have to shape up. I got my work cut out for me."

Since she had great experience of quality gay men, I listened. Her Insta-Gay programme included:

Over several years, I did all of these, under her close supervision. (Except for the Nair.) She partcularly loved supervising the chardonnay, which needed to be chilled just so, and could contain no traces of oak, lest it butch up a perfectly poofy drink. She would suffer no butch affectations among her fags.

"But Betty," I protested, "I'm doing Invert 101 at the Gay Men's Health Centre, and my teacher said there are actually some quite butch homosexuals, you know, with jeans and flannel shirts and stuff. Why can't I be one of those?"

"Of course there are butch homosexuals. They're called lesbians. And sometimes," she said wistfully, "I wish I were one of them. As a fag buddy, you realise that it's your duty to comfort me whenever a guy is thoughtless, inattentive, or dumps me for no good reason. "

That would turn out to be often, so I felt it better just to move in.

Posted at 12:00 AM in Stupid Slice-of-Life Shit that's Supposed to be Charming | Permalink | 0 comments